"Gandalf for President" - Tolkien and fandom 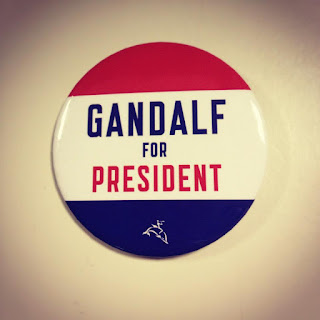 When I first became interested in JRR Tolkien in the middle 70s, there was not much attention paid to him by the British mass media - but when there was, there was always some reference to the popularity in US college campuses, and to phenomena such as the 'Gandalf for President' lapel button, and graffiti along the lines of 'Frodo Lives'. Then The Lord of the Rings (LotR) movies in the early 2000s triggered another - much larger - wave of mass-, and the social-, media fandom.

When I consider the phenomenon of Tolkien popularity represented by the Gandalf for President button, I can find no relationship at all between that and what I value in Tolkien or LotR, with what is actually-in Tolkien; indeed the joke political slogan is the antithesis of what the LotR represents ex-plicitly, im-plicitly and every kind of plicitly... Saruman for US President/ Sauron for UN President would make a great deal more sense.

In their way, 'fans' of Tolkien are sincere; and may expend a great deal of time, money and effort in their fan activities. Yet, in the end it gets the participants nothing-at-all - it corrupts Tolkien rather than learning from him.

Fandom - by its insatiable (daily, hourly) appetite for novelty, and it mass nature, always corrupts; and always corrupts in the direction of prevalent mainstream ideology: whether that be 60s hippiedom, late 70s environmentalism, or - since the 80s and increasingly - the various facets of the sexual revolution, political correctness and 'social justice'.

Instead of learning-from Tolkien; it is quite normal for fans to read-into Tolkien whatever happens to be the current nihilism, hedonism, materialism, atheism... somehow fans find in Tolkien exactly what they seek - or else try (in effect) to 'teach' Tolkien about feminism, socialism, radical sexuality... whatever - for example via the vast mass of fan fiction (including 'slash' fiction) that quite explicitly inserts this kind of stuff into Tolkien's world.

Other fandoms are closely analogous - revealing that this is a property of fandom rather than being related to specific authors or their work. In Harry Potter, another work of Christian fantasy with traditional values at its heart; the main fan website was initially obsessed with the 'shipping' (romantic relationships between) the main characters, in all possible and inconceivable combinations. Later the web pages and fandoms were quite explicitly and systematically enlisted for a check-list of current social justice campaigns, such as agitation for same sex 'marriage' legislation. And the fans duly complied, with apparent enthusiasm and zeal.

Or Brandon Sanderson - I recently attended a talk, reading and book signing done by Sanderson; which was packed with hundreds of fans who turned-out and paid money to be there... and I say fans, because in the Q&A session every single one of the couple of dozen questions was related to the most trivial, ephemeral and superficial aspects of his work. There was not one single interesting, insightful, or challenging question asked by this mass of people; not the slightest indication that the novels were anything other than depictions of magic systems and 'cool' personalities.

Sanderson is an active Mormon, and all of his work is permeated with a serious consideration of religion and spirituality; both on the surface and as underlying structure. But it was clear that for Sanderson's fandom this was of sub-zero interest - invisible and irrelevant.

The phenomenon of fandom is therefore at best trivial and fashion driven, there being more incommon between fans (regardless of what they are fans-of) than between fans and the subject of their fanaticism. Fandom is corrupting and destructive of whatever is good in the authors and works that get caught-up by it; and in its advanced form, fandom embodies subversion and inversion of whatever is specific and distinctive in its subject matter; the aim being to reinterpret and rewrite it in line with currently-dominant, top-down, manipulative social campaigns that ultimately emanate from (and are funded by) the global Establishment elites.

So the phenomenon of fandom is a product of evil purpose; and has a malign influence all-round. No wonder that the elderly Tolkien was so confused and appalled by its first stirrings in the 1960s, and by the 'Gandalf for President'-type expressions.

Journalists thought that this was 'ungrateful' of him, because masses of fans led to more sales and more money in Tolkien's pocket.

But Tolkien was not a 'professional author' - he wrote from the heart and for the highest motivations. And he realised that fandom had nothing to do with him or his work; but on the contrary was the attempted obliteration of his work, the attempt to harness his books for a dark agenda.

There's a Catholic Youtuber that goes by the handle of Missing The Mark that had an excellent explanation why LARPers are a laughing stock that I think is pertinent to your point.

Most LARPers don't LARP hard enough. He'd grown up with friends who started playing the games and for them, it led to an interest in actual skills and more real interests like blacksmithing or craftsmanship. Most LARPers don't make that shift of growing up, the distinction CS Lewis made between a child fascinated by Greek mythology actually being spurred to learn Greek. Many kids who grew up reading sci-fi then became scientists and engineers, more than one police officer was a Batman TAS viewer growing up, and many soldiers grew up on Captain America.

Fandom is like this. Their enjoyment is too surface. They don't develop courage from reading about courageous acts; just a taste for the reading.

@MD - I'm not interested in 'laughing' at nerdy fandom - far from it. That is the mainstream media/ leftist response; and spontaneous enjoyment is good in itself, so far as it goes. Plus I am prejudiced in favour of nerdy enthusiasms.

But I'm instead pointing out that, from my very different persepctive, fandom of good things (or, of things that contain good) does not deliver the improvement that might have been hoped.

And indeed, in this world (here and now) where essentially *every* institution has been incrementally infiltrated, subverted and inverted; fandom of any size rapidly becomes (if it was not always) just a part of the system of corruption.

One might reasonably have hoped that the Harry Potter phenomenon might have been a social force for good - since the books have such a vast readership, and are rooted in Christian values and values such as love, courage, family... Yet that has not been so.

Back in the 60s, when Tolkien fandom got started, there would have been hope that Tolkiens greater work, and greater goodness, might have had an even more powerful benefits among the hippie generation; but that was not so.

Indeed, even among Tolkien scholars, there seems little perceptible benefit/ effect from the books - since most of the scholars are wholly-assimilated to majority, mainstream, politically correct leftism - as if Tolkien had never existed; and they simply get-out-of, or read-into, Tolkien whatever academic concerns are currently-fashionable.

The good done by the objects of fandom is at a personal - small minority - level; and the benefits do not get scaled-up into fandom.

I feel that Michael has a core point.

There is a distinct qualitative difference between the kind of person who takes their enthusiasm for mythic stories in the direction of serious application and those for whom it remains a childish game.

It is unfortunate that "serious" scholarship falls into the latter category due to the institutional corruption of the entire education system, which reached higher education relatively late only after throughly debasing primary education.

Or rather, Micheal's point is the core of what I see as the meat of your post...that mythic stories do no good if we do not apply them in realistic ways to our lives rather than merely glut our imaginations on escapism from the existential despair produced by the pointlessness of a life that doesn't challenge the evil around us.

There is indeed a fundamental difference between pretending to be strong, skilled, and courageous as the heroes in stories as opposed to actually trying to incorporate that virtue into our real life in some way.

I think no one whose interest is serious would characterize himself as a "fan." Have you ever heard of a Bible fan? A Plato fan? Even a Tolstoy fan?

"Instead of learning-from Tolkien; it is quite normal for fans to read-into Tolkien whatever happens to be the current nihilism, hedonism, materialism, atheism... somehow fans find in Tolkien exactly what they seek - or else try (in effect) to 'teach' Tolkien about feminism, socialism, radical sexuality."

I am sure you have noticed self-described Christians quoting the Bible to support their favorite modern political cause (socialism, mass immigration, etc.) They are, in effect, "fans" of the Bible rather than real Christians. And as you say, this is with a subversive and evil purpose.

Dexter - indeed. Some Christians built this trap by asserting that the Bible, read verse by verse, and understood literally (by light of the latest linguistic scholarship) was the bedrock of Christian faith...

So if you can find a verse that can be argued to mean (or have-meant when it was written) some factoid, then this is assumed to be decisive.

They were trying to make a 'system' that was immune to personal intention and would compel the truth upon the reader.

Pretending to be perfectly biblical instead of finding real ways to apply the principles of the Bible to their lives, since the 4th century.

P.S. I guess the Pentateuch fans have been around even longer...according to the Bible. Fandom may be an intrinsic part of human nature, though it must have been harder back in the earliest days of humankind.