We had a lovely walk on the North Pennines in Northumberland today - and out on top of the heather moorlands the birds were more obvious than ever before: mating season, I suppose.

Lapwings were doing stunt flying, chasing each other; and making all kinds of weird, electronic-sounding noises - as well as the occasional pee-wit; which gives them their other name.

A single Golden Plover was first identified by its plaintive, sweet single note; then seen running around with its head down - very wary of us. 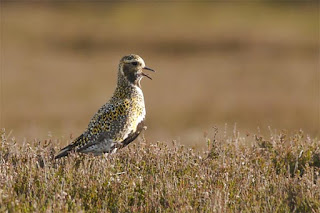 Curlews are the emblem of the National Park, and they were doing their usual long glides and long warbling calls - but also swooping in circles. One was landing, circling and landing - very bold, and making quite a variety of strange sounds, and swooping close to give us a good view. 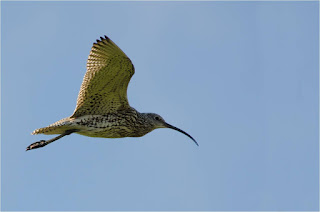 There were also skylarks, and gurgling grouse; many hundreds of Swaledale and Cheviot sheep and their lambs; warm weather, and lovely views out to distant horizons. A glorious day...