Setting out on a (modern) Fellowship Quest... 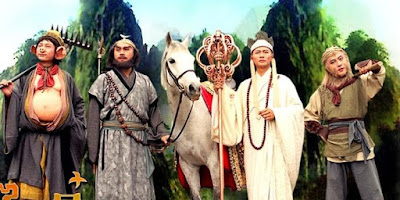 Pigsy, Sandy, The (transformed) Horse, Tripitaka and Monkey from Journey to the West - en route to finding and bringing-home the sacred texts

I am often stirred by the idea of a 'fellowship quest' - a small group who go on a journey to find, discover, destroy something; for the good of all. A band of brothers against overwhelming odds - the sort of thing seen in Tolkien's Lord of the Rings, of Lewis's That Hideous Strength - and which links back to medieval examples such as Malory's King Arthur and Wu Cheng'en's Journey to the West.

When I consider what might be our modern equivalent, I am initially faced by a via negativa of what it would Not be - rather than any clear idea of what it should be; because it does seem clear to me that the old style heroic quest has been made impossible (or rather useless) by modern materialism, and the modern tendency to reduce spirituality to psychology...

The kind of journey we need to embark upon is one where we don't go to any particular place, and are not accompanied by any physical persons; we seek something that can be known only by an inner and direct intuition - and which will save only those who grasp it for themselves - the most that the heroes can do is point at it, or at least point in the direction where other people might fruitfully start looking...

The companions are as likely to be drawn from the imagination as from the address book; and are more likely to communicate in meditative convictions as by words or writings or gestures...

Read the whole thing at Albion Awakening
Posted by Bruce Charlton at Monday, May 21, 2018