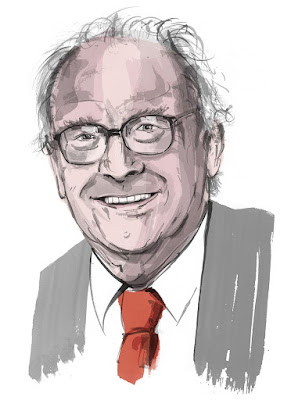 I've just heard that Michael O'Donnell has died; someone whom I liked, knew a little, and who influenced me considerably in my younger years.

He was editor of a marvellous fortnighly journal called World Medicine, which I read from my middle teens (my father, as a dental consultant, received a free copy) into middle twenties; and which attracted me to study (and practice, a little!) medicine.

It also educated me about some other topics; such as opera - I discovered Luciano Pavarroti thanks to a review there. I also first encountered David Horrobin, who later bequeathed me the editorship of Medical Hypotheses. In general, World Medicine was essential reading for me, and its 'spirit' helped to form my general attitude to many things.

After I began Medical School in Newcastle, it was not long before O'Donnell visited and gave an excellent talk at our student society. And in my final year, he published my first ever piece - a short letter about medical education. The response from other students and doctors made me realise the huge impact of World Medicine, since nearly 'everybody' saw this letter and commented to me about it.

Some years later I met O'Donnell several times, exchanged letters, and spoke with him on the phone; and he sent copies of some of his books. On the the first of these meetings he spontaneously recalled publishing that letter and what it was about!

O'Donnell was a lapsed Catholic, and on-the-left politically; but in those days such traits were not (as now) enforced and rewarded by the mainstream establishment - were indeed something of a disadvantage; therefore not invariably (as at present) a mark of corruption and evil intent! According to Wiki, O'Donnell was sufficiently principled to decline the offer of an OBE; which almost never happens among the current crop of tenured radicals and Establishment revolutionaries.

Anyway, I have fond memories of this warmly humorous, humane, lively, decent and enspiriting man; who helped my writing and inspired me by his advice and example when I became an editor myself.

Declining a gong is a Good Thing only if you don't mention it.

I like to think I'd have declined any gong, though I admit I'd have been sorely tempted by O.M. or C.H.
But even then: Get thee behind me, Satan.

@dearime - Well... That's a bi like ducking for witches. If nobody ever mentioned they had declined a gong, then we would not know that anybody ever had...

Obviously somebody that boasted repeatedly about rejecting a gong would be a Bad Person, but there is no harm in being open about the fact.

There is a list of known examples on Wikipedia somewhere; but most examples are no evidence of principled rejection eg people who reject one kind of gong, then accept another.

There were some aristocrats - such as the Historian (etc) GM Trevelyan - who had a kind of snobbery that would never accept any award that went before their name (like a knighthood or life peerage) but would accept ones that went after (especially OM or CH).

Sorry to disappoint, but I have no stories about having turned down any awards - whether ones tha twent before, or after, may name. On the other hand, I have never sought them!

I know *a lot* of colleagues etc with gongs - and I would say that O'Donnell was correct in his belief that the system is corrupting - of academics as well as doctors.

I have also noticed a highly significant statistical correlation between outspoken leftist political radicalism in youth, and the subsequent incidence of gongs (and the desire for gongs) in later life.