What does the prependerance of over-promoted middle managers in leadership positions tell us? 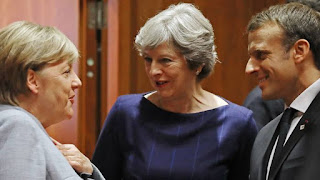 The so-called Leaders of (nearly) all Western nations are not leaders at all - but over-promoted middle managers; and this also applies to most major churches, the most famous universities, multinational industrial and media corporations, a multitude of schools, government departments...

Indeed, nowadays, almost everyone in charge of almost every type of major social institution is intrinsically incompetent.

By why? Considering that these people are constitutionally incapable of doing their jobs - why do they keep getting appointed - increasingly and in all situations?

An over-promoted middle manager lacks leadership qualities; and is capable only of following instructions. And that is the clue to why such people are appointed.

The presence of a middle managerial mediocrity in a senior leadership position that they cannot possibly fill - no matter hard they might try, indicates that those who made the appointment wanted to be sure that the individual would do what s/he was told.

It confirms the truth of what 'conspiracy theorists' tell us; which is that the pseudo-leaders of the West are just a fake facade; and the real power, influence, decision-making - the real 'leadership' - lies hidden and behind the scenes.

A further, and synergistic, aspect is that real leaders are never abundant - and are found at an even lower proportion among the affirmative action groups that are favoured and privileged in the West.

And this provides a perfect excuse for placing incompetent but compliant bureaucratic drones into positions that need leaders - or would need leaders if the objective was to optimise social functioning; rather than to create a totalitarian system of universal surveillance and micro-control; to spread and amplify an environment of fear, resentment and despair.

In that sense, middle managerial mediocrities are doing a great job!

Nominal determinism is a powerful thing, and occurs to some degree in the waking world as well.

At my current organization the Insane Level of the organization (that is now present in any organization) emits occasional complaints about a 'shortage of managers'. Good!

David Healy wrote an excellent post identifying the managerial-managed state of mind as an all-around hypnosis. Hypnosis, he says, is reinforced by making the person under hypnosis undertake nonsensical actions. The advice he suggests makes for an interesting thought-experiment when taken outside the context of medicine. To paraphrase:

'First you need to realize that, no matter how awake your manager appears, he or she is just sleep-walking.

Second, don't let managers measure or screen anything unless it's directly related to a problem you brought them. If you happen to be there and they suggest measuring something -- public opinion, the GDP, worker productivity -- say No. If they suggest measuring something linked to a problem you brought them, also consider saying No.

Third, don't go along with your manager when he suggests something stupid. If something is wrong with an initiative, it's most likely the initiative itself that caused it. Don't buy the line that this is another problem that requires another initiative.

Fourth, ask them who they're having an affair with, or anything that disrupts what might seem like a conversation, but is more likely to be a stereotypy.

Fifth, get them to make a judgment call about something that counts -- anything.'

However, I think that Dr. Healy may be an optimist and that this 'therapy' might produce improvement 1% of the time and 99% of the time put the chronic manager into an acute state of psychological distress. However, it may make clear to other people what is going on.