The romantic appeal of life as an unique quest 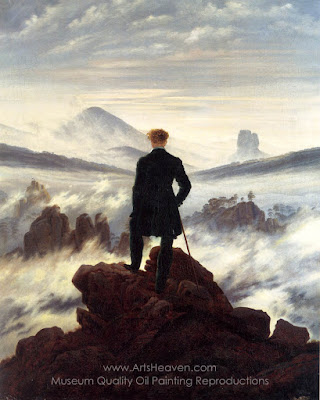 This is for those who find the above (The Wanderer above a sea of clouds, by Caspar David Friederich) an inspiring and energising painting, capturing a deep yearning... rather than grandiose/ cliched/ corny/ kitsch. I first saw it on the cover of a book by Nietzsche.
I certainly feel it, and so do many others - the appeal of my life being an unique quest; following an untrodden path, to reach a previously uninhabited destination. This is the creative life (using creative in the broadest sense with reference to life, nor restricted to the arts, sciences etc).

Since the romantic era, the yearning to live 'a creative life' has been a very common - at least at some point in a person's life. In ideal terms, people don't want to fill a slot - they want to occupy a new place, a place they have made themselves, and ideally keep on making.

But whether this really works as a guiding idea for life depends on how one regards the world in an ultimate (metaphysical) sense.

When you know where you are going, and the only difference between the people is the route by which you arrive. If the place arrived-at stays the same; if we cannot personally aspire ever to change that place... well, the creative life would not be genuinely create-ive; it would be merely a matter or selections and rearrangements of already existing stuff. It would be like the novelty of a random number generator.

I realise most people are not troubled by such bottom-line incoherences; but i was never able even to aspire to the kind of life as a quest view without also being somewhat paralysed by the recognition that it didn't really make sense; and that I was having to blind myself to the fact.

So, what is the fullness of creativity? Is is even possible? - Yes, as it turns-out.

The first thing needed is that we live in A Creation, a world being-created - with meaning and purpose that is of personal relevance to me. Because creativity needs context, and this is the context it needs. My creation needs the context of being linked with other creations.

Atheistic materialistic people are always saying that each of us must create his-own meaning and purpose - and stuff like that. But creating in a void isn't creation, because all such activity would be arbitrary. There would be no difference between creation and mere novelty - and indeed no yardstick by which novelty might be detected or measured... Only when creativity links-up is there meaning and purpose.

And then there needs to be permanence as well as newness. Normal metaphysics cannot actually comprehend this; but when I discovered and understood the evolutionary-developmental metaphysics sketched by Mormon theology and clarified for me by Owen Barfield's analysis of ST Coleridge's thought and his concept of Final Participation (of personally participating in the ongoing work of God's creation).

Then I could see a way that creativity could be both permanent and also genuinely transformative... Could be open-ended yet derived from the past - because all 'things' are beings (or parts of beings) and have their identity by lineal descent from eternity.

I can now see that each life can be unique in both its path and its destination and at the same time creative; I could see how things could really change (be transformed by creative activity) yet really permanent (because Beings are eternal).

Of course, this doesn't solve any problem of life; all it means is that now I can try to do it in a whole-hearted manner. It may not seem much to others, but it makes a big difference to me.

I think I more or less share exactly the same perspective; albeit with a periodically wavering and unstable conviction in the underlying metaphysical assumptions of Christianity. Try as I might, my certainty is labile, I am plagued with doubts and have breakthrough paroxysms of existential angst driven by melancholy, of the 'what if its all a fantasy to sugar coat the nihilistic really pill?' type. I seem to have been damaged by too much materialistic/scientific modern education and/or personal disposition. I can reattune with a spiritual perspective quickly in private contemplation, or when in contact with other Christians, but I back-slide constantly in daily life and then repent the failing. Conversely, the sun rise of God's grace and the realization that Jesus loves me seems to arrive when I need it most, to keep me motivated to pursue the scheme of creation with the motivation of a pure spirit, that you describe above.

Apt painting choice by the way. Such a scene whilst walking the hills is one of my favourite, and for the same sentiments. It feels, deep down, that the only truly satisfying landscape must offer the prospect of creative and unknown adventures, just over the horizon... wouldn't you agree?

@David - yes. It is about recognising that the romance of distant prospects is a reality.

Tolkien gets it perfectly in Leaf by Niggle:

After a time Niggle turned towards the Forest. Not because he was tired of the Tree, but he seemed to have got it all clear in his mind now, and was aware of it, and of its growth, even when he was not looking at it. As he walked away, he discovered an odd thing: the Forest, of course, was a distant Forest, yet he could approach it, even enter it, without its losing that particular charm. He had never before been able to walk into the distance without turning it into mere surroundings. It really added a considerable attraction to walking in the country, because, as you walked, new distances opened out; so that you now had doubled, treble, and quadruple distances, doubly, trebly, and quadruply enchanting. You could go on and on, and have a whole country in a garden, or in a picture (if you preferred to call it that). You could go on and on, but not perhaps for ever. There were the Mountains in the background. They did get nearer, very slowly. They did not seem to belong to the picture, or only as a link to something else, a glimpse through the trees of something different, a further stage: another picture.