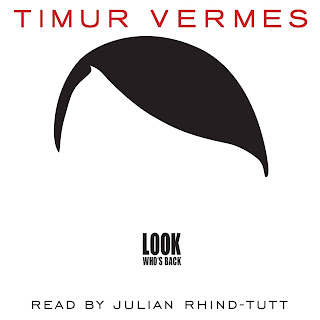 I first noticed this book when it was published in 2012, simply because of the classic artwork on the cover - and after browsing a little, bought a copy. I later watched the movie, and listened to the Audiobook version.

Look Who's Back has emerged, over the subsequent years and several readings/ listenings, as one of my favourite high-comic novels (at the level of such as Lucky Jim by Kingsley Amis, Changing Places by David Lodge, or Towards the End of the Morning by Michael Frayn); and the only one which is a translation; although one would never for a moment suspect it - demonstrating the superb job done by Jamie Bulloch.

(I usually find translations of novels, even by prestigious translators, to be leaden - and need to 'make allowances'. Not here. It is as well done as William Weaver's version of Umberto Eco's The Name of the Rose)

The subtlety and twining-complexity of the humour, as well as the frequent belly-laughs, is first rate; and the whole is beautifully shaped and paced; and (that rare thing) has a satisfying ending.

The set-up is that (for never-explained reasons) the real Hitler appears in modern Germany, near to the remains of the Fuhrer bunker; and sets about to explore contemporary Germany and rebuild his power. This leads to a lot of very amusing satire, but a great deal more; although it is easier to say what it is not, than what it is. Indeed, the novel is (like all the best books) unique and unclassifiable.

Julian Rhind-Tutt does a tremendous job of narrating the book. Hitler is given a distinctive but slight, clipped German accent; while the other characters are allocated Received Pronunciation/ Estuary English or Cockney-'Mockney' voices according to social class and position (the Mockney - faked-Cockey - accent is very common in British mass media circles). In other words, with the exception of Hitler's narrative voice, the setting is by implication 'translated' into English, as well as the words.

Therefore, unless you dislike audiobooks, I would recommend this version above the written text; since Rhind-Tutt is able to guide the listener to the most apt 'tone' by which the novel can be appreciated.

This recommendation and the previous one regarding the X-Men movie are much appreciated, Bruce.

For some reason since the 2020 coup started I've been mostly unable to find anything worth reading or watching. Quite strange, since I devoured movies up until then.

I've only seen part of the film version, in German with English subtitles. I was struck by the physical appearance and vocal mannerisms of Oliver Masucci's Hitler--jolly, sardonic, tall, and physically dominating. We've seen the Hilters of Charlie Chaplin, Anthony Hopkins, and many others. To me, Masucci's was a John Cleese-ish Hitler!

@ap - The movie was worthwhile, and mostly good (Vermes did the screenplay) - but but with large differences from, Much less subtle and complex than, the book. As usual: when a novel is excellent - the movie is Never as good... it can't be.

The only exception I know of is Do Androids Dream of Electric Sheep? and Blade Runner; which are both among the best of their kind.