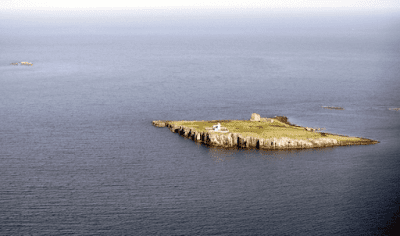 There is a certain island called Farne, in the middle of the sea, not made an island, like Lindisfarne, by the flow of the tide, which the Greeks call rheuma, and then restored to the mainland at its ebb, but lying off several miles to the East, and, consequently, surrounded on all sides by the deep and boundless ocean. No one, before God's servant Cuthbert, had ever dared to inhabit this island alone, on account of the evil spirits which reside there: but when this servant of Christ came, armed with the helmet of salvation, the shield of faith, and the sword of the Spirit, which is the word of God, all the fiery darts of the wicked were extinguished, and that wicked enemy, with all his followers, were put to flight.
From Bede's Life of Cuthbert

Just where does the spiritual war take place? The answer is that it is an inner war.

At the time of Cuthbert, Men's inner lives were also outward; so that devils or demons were perceived - seen, heard, smelled - objectively and externally: in public space. Men's thinking was (to a significant extent) a shared and communal thing, rather as we moderns imagine telepathy. And conversely, Men were not 'individuals' to the same extent - could not (and did not want to) separate themselves from the group (family, tribe).

Modern Men are necessarily individuals now - we look out from our inner subjectivity onto an external objectivity which seems utterly separate and alien; and about which we may feel so unsure as to lapse into the solipsism of thinking that only we our-selves are actually real (and everything else a deluded product of our imagination). This became mainstream in the middle 20th century, and (for example) James Joyce got global fame and Samuel Beckett and Harold Pinter got  Nobel Prizes for depictions of exactly this aspect of the modern condition.

But Men's minds have changed since then. According to God's plan, different souls (with different needs) are born into different historical places and eras, and armed with different aptitudes - and facing different problems.

Adult mainstream Modern Man perceives neither the demonic nor the divine. He is not just capable of autonomy from the group - but cursed by it. It is a fact of his life.

Modern Man co-creates reality, and needs to become consciously aware that he does so. His choice is whether to co-create worldly and mortal Satanic 'reality'; or to join with God in co-creating that divine creation within which we dwell.

Either we work with God; or against him.

Therefore, what was once only a partial individual responsibility for faith is now all-but complete. Because we just-are autonomous agents, we are responsible for what we believe. And if we subordinate our autonomy to a group (any group) then that is our responsibility as well.

Modern Man does not, therefore, battle with publicly-visible devils or demons ('evil spirits'), like those defeated by Cuthbert on Farne island; the spiritual war takes place within him.

Where then are the demons, and how do they 'get at' modern Men? The answer is that all location depends on consciousness - all knowledge involves thinking; therefore the reality of demons is both objective and also dependent on the minds of Men.

Evils spirits exist in men and their products - when conceptualized by Men. Therefore, demons live (nowadays) in forms of 'communication' - including the spoken word (as experienced and 'reported'), in pictures and moving images, in music, and in computers and the internet.

Evil spirits are sustained in this existence in the minds of Men (and of demons) and enter our minds when we attend to such stimuli and know them. Demonic thoughts appear in our thinking by such means - co-created by those who originated the stimuli and by ours-elves.

Thus, every temptation is also the result of an invitation - we 'invite evil by co-creating it in and by our minds.

In other words; the main battlefield of the spiritual war is in our own minds; where evil is frequently appearing; and our job is to recognize evil as evil, and to align with Good.

And if we ourselves participate in public discourse on the assumption that evil is Good - we have doubled-down on evil, and are doubly self-damned.

So, each of us is responsible for fighting the spiritual war in our own thinking, our own hearts; where evil 'stimuli' will seek out and discover our own weaknesses, and our own thinking will betray us to Their knowledge.

But every such onslaught - being partially self-created - can always be self-defeated by the act of repentance; by inwardly recognizing and rejecting evil - by affirming our commitment to Good.

There will be periods of respite from such onslaught of evil; but so long as we live the war will never cease because this is why we are here, why we remain alive. Every triumph against an evil temptation is some-thing learned, an extra strength - from which those who choose to follow Jesus to resurrected life in Heaven will benefit eternally.

But for those who shall follow Jesus (no matter how small and obscure they may seem to be); mortal life will be known in retrospect to be an endlessly challenging, exciting and heroic business.

Yes. I've just watched a 50 minute chat between Jonathan Pageau and Fr.Andrew on the former's YouTube channel. I find Fr. A's conception of the Faith most liberating - it takes one out of the all-pervasive solipsism Bruce talks about. Lifts us out of the modernistic, individualistic prison which so many of us mistake as freedom. We've been sold a bill of goods, as I've heard Americans say, or sold a lemon, as I've heard it said in Liverpool!

Our contemporary level of consciousness is very far from giving us the full picture of reality. Quite the reverse really.