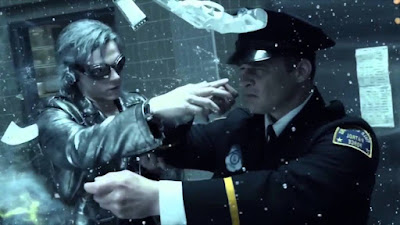 There is something I like about the X-Men movie series, which makes them stay in my mind with a pleasing flavour despite that most of them are only moderate movies. In other words, they have grown in recollection.

The best of the actual X-men movies is probably Days of Future Past (although Logan from 2017, which is about Wolverine mostly, is probably better).

The basic 'situation' of these movies is a simple question, but without a simple answer. Should the mutant population of X-Men try to live in peace with the normal humans? Or; should mutants accept that the normal humans will (sooner or later) try to enslave or exterminate them (which would suggests that the mutants should strike pre-emptively to do likewise)?

The movie plots are driven by two frenemies: Professor X - Charles Xavier - believes in peaceful coexistence; and Magneto - Eric Lehnsherr - believes that the X-Men should rule the world, lest they be ruled.

Despite that Magneto's views or explicitly linked with the death of his Jewish parents in Auschwitz and the Holocaust; which, in Hollywood would usually be a sign of a dumb plotline based on the innate superiority of this type of victim; instead here Eric's moral authority, his sincerity, is repeatedly undermined by his willingness to sacrifice other mutants (even those he loves the most) to 'the cause' - but not sacrificing himself.

There is always the suspicion that Magneto aspires merely to be a totalitarian dictator, and that his pro-mutant cause hides (even from himself) the demonic nature of his real motivations.

While Charles's vision of a peaceful future (with his idyllic school/ college of mutants; set in a beautiful country house and grounds) is also undermined by his tendency to control people towards this end; especially by his ability to read minds and implant motivations.

There is a suspicion that Professor-X is fighting against his own more politically-correct style of totalitarianism - full of vague idealism, but actually creating social instability and hedonic weakness and passivity.

However, Charles is overall the 'goody' - not least because of his real care for people, his self-sacrifice, and his capacity to learn.

As for Days of Future Past; I will say nothing specific - except that has Tolkien-like resonances concerning free will and providence: in this case applied to the science fiction problem of changing the past to aim at a better future. It turns-out that to change the past by violent coercion is ineffective - the evil past merely corrects itself. Evil cannot defeat evil.

The only way that matters can be made better is by the free choice of an individual; and at the specific instant when that personal agency is used in line with 'divine providence'... the whole world is transformed for the better.

This strikes me as one of the most important lessons we need here-and-now.