My special gratitude to Owen Barfield 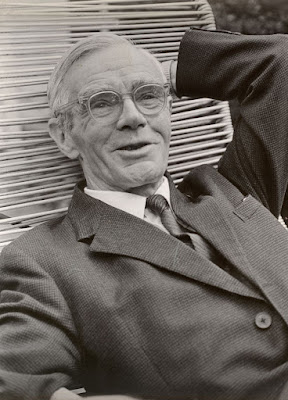 When I encounter a special author, I will initially hurl myself into trying to understand him - read many books, think a lot, take notes (in a meditative fashion); and often talk and write about these experiences.

After a while, when I have become surer of what they mean and have a fairly sold grasp on it; I find that what I have learned amounts to some particular things; but I then need to detach these specifics from the whole of the writer's assertions - because I have never found any writer whose views I can endorse or believe fully.

Eventually, I get to a point where I have (more or less) obtained 'what I needed' from a writer; and may (more or less) cease to re-read or explore actively that author's works.

I have, at this point, built-into my own philosophy of life, some elements from the special author; and from then onwards, these ideas may undergo further development and refinement - and may indeed end-up by being very different from how they are in that author's own work.

So, the end result is that I retain a special gratitude to the author for insights that I needed; but I have ceased actively to engage with that author, and am then often more aware of my points of disagreement with him, rather than agreement.

Yet the core debt remains - I have been changed, and for the better, by the encounter.

I have almost reached this stage with Owen Barfield. I do continue to engage with his writings; in a cyclical fashion - but his importance to me has by-now been fed-into my own philosophy-of-life, and they have interacted with other ideas from elsewhere; have been modified; and have developed in (sometimes) different directions.

Looking back; what I got from Owen Barfield - in a general sense - was a positive and hopeful attitude to life, deriving from his articulation of Final Participation.

Until I encountered Final Participation, I could not see any positive direction for human life - here and now. I saw life as a binary choice between the present and the past; a present which was alienated and increasingly evil - and a past which seemed both irrecoverable and harmful to try and recover.

It was as if an adolescent hated being an adolescent, and yearned for childhood - but knew that childhood could not be recovered - so that this mortal life had no real hope within itself: no real positive purpose.

But through his concept of Final Participation; Barfield made me realize that there was a third possibility. Barfield terms the 'childhood' state Original Participation and the adolescent state Consciousness Soul; and he analyses how the one derived from the other through a process of unfolding development of consciousness, that stretched across different generations and historical eras.

The 'original' participation was an immersive, passive, unconscious sense of being part of the world and knowing the spiritual; while the consciousness soul was that active, self-conscious way of thinking that finds itself cut-off - alienated - from the spiritual, and indeed from the world.

I personally have found (since adolescence) this cut-offness, this being an 'observer' of life, trapped inside one's head - locked into one's thinking; to be appalling. It removed depth and meaning from experience, it dissolved all sense of purpose.

This was a demotivating and depressing situation - which recurred daily, almost hourly, and needed always to be fought; but where the fighting seemed to provide no more then a subjective and ephemeral amelioration.

For me alienation was The Problem of my adult life - and I was always seeking solutions; but never found any that were convincing, effective, strategic.

Barfield convinced me that this development pointed forward to Final Participation which was an active, chosen, conscious state of being part-of the world; and of contributing creatively to the world.

I realized that many of my best and most hopeful experiences in life could be seen as glimpses of this Final Participation state, but without Barfield's insights I could not make sense of them - could not learn the lessons they had to teach...

Instead I merely treasured these 'moments' (epiphanies', 'peak experiences'. moments of 'joy'); held onto them, and tried to seek them out - but with small and dwindling success... And the treasuring of these moments was itself alienating - given their temporary and very partial nature.

Having been given certain analytic tools and deep insights by Barfield; I was then starting to use them in a Christian context that I had already in-place, but which was deficient in exactly the areas that Barfield supplied. I began to see - more and more clearly - my path to the Romantic Christianity that I had always implicitly wanted but had not been able to articulate.

That is; a Christianity that supplied the Romanticism which could cure my alienation, cut-offness, trapped-in-the-headness which had been left almost untouched (or even exacerbated) by mainstream Christianity.

I found (I find, now) that I was was going beyond Barfield, and into areas where he would very probably not have followed; but I could not have done so without Barfield's help.

So, now I find myself having integrated Barfield into my own thinking; having changed some of his core ideas in the process - yet I know the Barfieldian provenance of my situation; and that he ranks as one of a handful of vital sources in my own deepest convictions.

I find this happens as well with "philosophers" or "thinkers".

But your post made me realize that I have different reactions to poetry and music.

With music, say Haydn's Piano Trios after listening to them so much I don't really need to listen again. The thing is "in my head" permanently and will pop up at odd times and I can hear it whenever I want.

Poetry like Shakespeare or Homer becomes overwhelming. For example, if I try and re-read The Illiad I get almost nauseated mentally from the complexity and intensity before the first book ends. I can't go on. But I can reflect on parts in my head. Same with say Coriolanus...

Thankyou Bruce. And for the link to your earlier Final Participation Barfield post. You have come back with much from your walk through alienation.

Your gratitude is very touching. My husband and I took the opportunity to discuss how interacting with your writing has influenced our beliefs.

I thought it would be annoying and awkward to go on at length, but one was that it is so much easier for me to forgive people, to recognize their right to interpret their own adventure, as I also must do for myself. My personality is very typical-female pro-social, so this has been very helpful in reducing neurotic thinking, which in turn allows for a better relationship with God.

Thank you for your writings!

And thank you for your comments! Which have been among the most helpful in this blog's history; due exactly to your "typical-female pro-social" nature, which would otherwise have been lacking here.