Passing on a tip about a substance called Shoe Goo.

I always wear double-thick cushioned-sole running shoes (various styles) made by Hoka Hoka, due to suffering osteoarthritis of the knees. These trainers are designed for serious road runners, and uniquely provide a really remarkable degree of shock-absorption, that allows me to walk long distance on the city streets (and country trails) without provoking symptoms. For which I am very grateful!

Hoka Hoka have three main disadvantages: the first is that they very expensive (and only sold in about a dozen places in the UK - I get mine from George Fisher in Keswick); the second that they are large and garish and look absurd when worn by the likes of me rather than serious athletes (I imagine that the manufacturers would pay me not to wear them); the third is that they wear away rather quickly being made of very soft and gripping rubber (and because I wear them nearly all the time).

I happened to be chatting with a proper runner who had discovered that Shoe Goo... 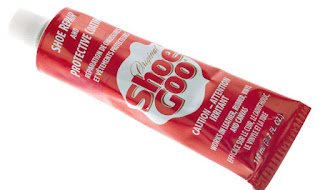 which is a clear rubbery kind of glue - could be used to prolong the life of these and other running shoes - or indeed rubber-soled shoes of any type.

As the soles begin to wear, you clean the surface and apply a layer of the glue, and this then becomes the surface in contact with the ground. It usually lasts a few weeks before the glue itself wears away and another layer needs to be applied.

The Shoe Goo itself seems to be very grippy, so this is not a problem.

I have also used it to 'invisibly' repair a small hole in my son's shoes where the leather met the sole, and to prolong the life of my daughter's school shoes.

Now, I wouldn't be without this in the house. It isn't expensive, and two tubes have lasted me about a year and a half so far. The only problem is that it has a really terrible 'organic solvent' type of smell, which tends to give me a headache unless I do the goo-ing outdoors.
Posted by Bruce Charlton at Thursday, June 02, 2016

Another great product if you grind down your heels like I do is Freesole®, you can actually build the heel back to level.

We've been using Shoe Goo for about a year. Good stuff.