The hardly-known Ancient English Neolithic 'high civilisation' (which continued into the early Bronze Age) is something that increasingly fascinates me - especially in comparison and contrast with the roughly contemporary but vastly better-documented and far more technologically-sophisticated Ancient Egypt.

I am going to speculate freely on the nature and spiritual life of the Neolithic.

This was a society of magic rather than machines (things were done by magic that were later and elsewhere done by machines) - the obviously 'man-made' was disliked, and complex technology was regarded with revulsion and suspicion.

Since the economy was based on farming, the landscape was of course substantially re-made. There were long, winding or snaking roads and pathways - and these were unpaved - merely short grass, perhaps worn or scraped clear of turf to expose the natural chalk or other stone beneath. Large earthworks were not faced with rock but merely scraped clear of turf to stand-out white, grey or brown against the horizon or green fields.

Monuments were constructed as a matter of primary social activity - yet there was an attitude of minimal intervention. The standing stones and structures were left substantially natural, rough-hewn; various in size, placed according to a sense of rightness and without precise, abstract mathematical placement.

Those who harp-on about 'numerology' and the celestial alignments of Neolithic monuments have made a false emphasis - a society which strives for abstract geometry would, like Ancient Egypt, make monuments from exactly replicated blocks, with straight edges, sharp points, smooth surfaces; precision placed onto stone fixings - not variously sized and shaped, rough stones placed onto grass. There were alignments - but the whole flavour was organic and approximate - the fine interpretative 'tuning' was done on the basis of magic and wisdom - not 'read-off' like a scientific precision instrument.

Indeed, there is no point in attempting exact celestial geometry in England where clouds cover the sun, moon and stars most of the time - that kind of alignment only works under reliably unrelenting clear blue skies.

In Neolithic times, things were arranged in a suggestively symbolic fashion; features were made clearer, more obvious using contrast, colour, accumulations of earth, stone, rocks and wood - but the ideal was that no matter how obvious the features should seem to arise from the natural landscape; as if organic growths.

(Stonehenge is a late, indeed terminal, feature of this society - and marks the onset of corruption with an attempt at precision and a cult of death and sacrifice.)

The Neolithic was organised and literate - but the organisation was in the form of a fluid confederated druidical hierarchy of graded initiates, working individually and informally as mobile masters and apprentices and not organised into static colleges or temples.  The literacy deployed a symbolic and pictorial language - instead of sentences and paragraphs there were complex diagrams - each unique but with standard components - incised on leather and wood, or scraped onto stone; the subtle interpretation of which was an arcane art (so there was no need for secrecy - ordinary people could not comprehend the 'writing').

The pace of life was slow, measured. The focus of life was religious - the primary deity being associated with the Sun, the secondary deities with the Moon and stars. The stars made up a permanent and unchanging eternal basic of life; the wandering planets tracked the linearity of time such that each year was unique; the Sun was the long term timekeeper by the seasons, the Moon phases provided the monthly scale organization of daily life.

Military strength (and this was an internally peaceful society) was directed against invasion - and was achieved by the capacity to assemble and deploy vast armies, unified by religious belief, trained to work together by participation in constructing the vast earthworks and monuments, and impossible to rout or demoralise. They used projectile weapons (probably storms of spears, thrown in coordinated waves) to devastating effect; followed by stone axes wielded by powerful and untiring arms trained in day after day spent earthmoving and stone lifting and shaping.

Hostile invaders, who necessarily came in small groups by ship, poorly supplied, without anywhere to retreat-to, different in appearance, language, behaviours - stood no chance against these massive and cohesive defensive hordes.

The farming, and the villages were a patchwork of shapes, no two the same yet fitted together; all rounded, all curves and bows - no straight edges or lines, no arches, no triangles, squares or perfect circles... Animals roamed with their shepherds.

The arts were of alliterating poetry - always chanted or sung from memory; the instrumental music for accompaniment and dancing was from pipes, percussion and drones. In singing, high clear graceful voices were prized above all; low gravelly voices were for humour and ribaldry.

There were no wagons, only beasts of burden; but there were boats everywhere - mostly flat bottomed rafts pulled from the river bank, or paddled canoes that resembled tree trunks on the lakes and inland waters. But the use of boats were governed by Moon and weather, magic and divination.

And they were waiting - spiritually waiting. The whole society was prepared and poised for the coming revelation, and the transformation of earth into Heaven.

England was like two gigantic hands, cupped and waiting to receive.

The differences between the two contemporaneous, magical High Civilisations of England and Egypt can be encapsulated by a comparison of Neolithic standing stone 'growing' from the earth into the mist of England (this one from Avebury): 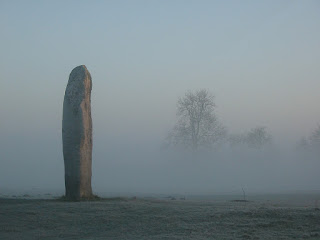 With a precision-engineered Egyptian obelisk against an electric-blue sky:

Visionary stuff, Bruce, and I believe quite true. This spirit is still there, lying dormant in the landscape. It can be reawakened but if/when it is it must be done in the name of Christ not as part of a pseudo-pagan fanciful revival saturated in modernism of something that never was.

Thank you for the speculations, your pictures do well to contrast the differences - the misty English landscape very much recalls to mind the magic of Middle Earth.

I wonder if the same thoughts vs Egypt could be extended to illustrate your point on why a fully "Roman" Catholic revival in England seems unlikely. I think the same differences lie in mentality and environment (similar to the mystical Orthodox versus legalistic Rome).

and a Roman Cathedral:

On similar lines, Brigflatts Quaker Meeting House of c1674 is a really nice plain building which I have visited

Modern Quakers are little more than middle class pseudo-Christian SJWs of the worst type; but the original ones has many admirable qualities, and founder George Fox was something af a genius.