Who are 'we' English? 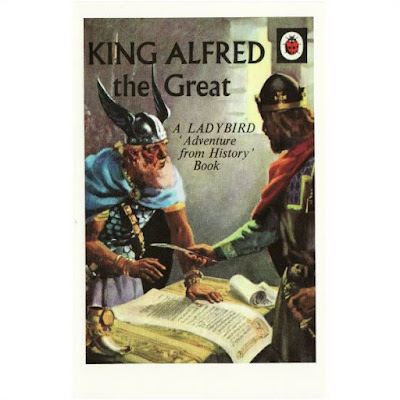 I was fortunate enough to have been brought-up on the children's history of England as a moral story - with goodies and baddies interacting to provide a clear, comprehensible and memorable narrative. (The one that was mocked, in a way comprehensible only to informed insiders, in Sellar and Yeatman's humorous book: 1066 and All That.)

But this is not modern - the same shift can be seen in the earliest chroniclers of British History from the Saxon times up through into the medieval era - the general stance is that the goodies were the Britons/ Celts and the baddies were the invading Anglo-Saxons, even when written from the Saxon victors (or Nomran occupiers) perspective. The whole Arthurian and Merlin legend, always popular, is based on this implicit assumption.

I think the key to this is that sometimes the moral good is derived from patriotism - so that the resident English (i.e the Ancient Britons get the moral approval when against Romans - despite druidic human sacrifices and the benefits of Roman Civilisation'); but that this aspect is trumped by religion.

So that when there is a Christian versus a Heathen conflict, then the Christian side will always be the goodies. This is why the Ancient Britons were the goodies in the post-Roman conflicts until the Anglo-Saxons became Christian; and why the Christian Anglo-Saxons were goodies against the pagan Vikings (despite that people such as myself - i.e. the blue-eyed - almost certainly descend from the Scandinavians, because that was where the blue-eyed mutation occurred).

When it comes to the final invasion of 1066 - and the Anglo-Saxons versus Norman conflict - we have Christians versus Christians for the first time in our island history.

Therefore, the Saxons are strongly felt to be the goodies, and 'we' are the armies of Harold, defending against the alien William the aggressor and usurper - because when both sides are Christian, 'we' defaults to the resident Anglo-Saxon English, i.e. on patriotic grounds.
Posted by Bruce Charlton at Sunday, June 19, 2016

According to" The Fall of Orthodox England" by Vladimir Moss, "The result of the Norman Conquest was that the English Church and people were integrated into the heretical “Church” of Western, Papist Christendom, which had just, in 1054, fallen away from communion with the One, Holy, Catholic and Apostolic Church, represented by the Eastern Patriarchates ..."

But I am sure this point of view was not presented to you in school.

Possibly trivial questions from an American:

If William the Conqueror is thought of as a "baddie," how does that square with choosing 1066 as essentially the birthdate of Britain? Since William's claim to the throne ultimately goes back through the Anglo-Saxon monarchs, wouldn't it make more sense to date it earlier? Or is 1066 a date imposed on the national consciousness by a Norman elite?

That's my second question: Since the Normans became such a big part of the English upper class, why were they not successful in portraying the Normans as "goodies"? Or are all of these categorical notions of more recent vintage, when "Normans" don't imagine themselves as anything but English.

I'm familiar with an example of such thinking. One of the whitest Mexicans I ever met once griped to me about what the Conquistadors had done to "us." I asked where his ancestors were from, and he said, "Spain and France."

@MC - Britain is the island including England, Scotland and Wales - the British Isles also includes Ireland. SO Britain was only united by King James in 1603. England was a concept that apparently arose in the history of the Anglo-Saxon the Venerable Bede (died 735). So 1066 was of significance as being the last time that the King of England (and the elite English ruling class) was replaced by invasion.

There were probably about 30,000 Normans holding down about a million English (an astonishing achievement in itself) - speaking a different langauge, and in a mostly illiterate world. They did not seem to intermarry much for about 300 years - so the Normans must have seemed very obviously an alien and usurping class.

My impression is that it was only after the two populations and their languages began to blend that there was integration - first evident in the flowering of poetry from c 1350 (Chaucer being the main representative) - at just this point the population was halved by The Black Death which 'rebooted' English society with the Anglo Saxon peasants being about twice as prosperous and having more power (the end of serfdom).

As for why people identify as they do - as you have pointed out, it doesn't have much to do with 'blood' - the nationalist movements of Ireland, Scotland and Wales were substantially begun by English people - as a trivial example the clan tartans of Scotland were invented by a man from Lancashire; as a more significant example almost all of the geniuses of Irish Literature (and there are many) were by origin English.

The Puritans and others campaigned for throwing off “the Norman yoke.”

“England, you know, hath been conquered and enslaved divers times, and the best laws that England hath (viz Magna Charta) were got by our forefathers' importunate petitioning unto the kings, that still were their task-masters; and yet these best laws are yokes and manacles, tying one sort of people to be slaves to another...

The last enslaving yoke that England groaned under (and yet [1649] is not freed from) was the Norman, as you know; and since William the Conqueror came in, about 600 years ago, all the kings did confirm the old laws, or else make new ones, to uphold that Norman Conquest over us; and the most favouring laws that we have doth still bind the hands of the enslaved English from enjoying the freedom of their creation.”

Gerard Winstanley, An Appeal to the House of Commons (1649)


“Norman saw on English Oak
On English neck a Norman yoke;
Norman spoon to English dish,
And England ruled as Normans wish;
Blithe world in England never will be more,
Till England's rid of all the four.”

Americans, who once at least identified with the Puritans, are inclined to these sentiments. Nevertheless, England would not be England without the Norman period.

@Leo - Winstanley was, of course, a proto-communist (and is a hero of the modern readical Left), so his words need to be interpreted in that light.

In a 'true' and mystical sense, England would still be England without the Normans, or indeed the Anglo Saxons, Norse, or Ancient Britons... Because whatever it was that made the people dates from the Neolithic period - and indeed some genetics backs this up (not that genetics has the last word, but...).

The Diggers, Levellers, and Fifth Monarchy Men were quite a yeasty bunch. I have considerable interest in their sincere, if not always properly guided, religious inclinations. The Levellers, advocates of popular sovereignty, religious tolerance, and equality before the law in an age when those were radical ideas, have my particular sympathy.

You could trace Communism to the Diggers' ideas, but you could also trace any benign, cooperative, not-for-profit economic or agricultural enterprise to those same ideas, including the LDS United Order, and it some ways its contemporary successor, AgReserves. The concept goes back at least as far as Acts 2:42-47.