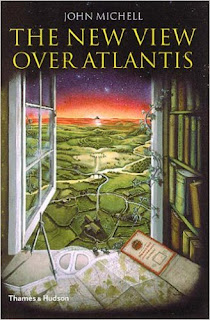 One hot summer afternoon, 20 June 1921, Alfred Watkins was at Blackwardine in Herefordshire. On a high hilltop he stopped and looked at his map before meditating on the view below him. Suddenly, in a flash, he saw something which no one in England had seen for perhaps thousands of years.

Watkins saw straight through the surface of the landscape to a layer deposited in some remote prehistoric age. The barrier of time melted and, spread across the country, he saw a web of lines linking the holy places and sites of antiquity. Mounds, old stones, crosses and old crossroads, churches placed on pre-Christian sites, legendary trees, moats and holy wells stood in exact alignments that ran over beacon hills to cairns and mountain peaks.

In one moment of transcendental perception Watkins entered a magic world of prehistoric Britain, a world whose very existence had been forgotten.

To recognise 'design' is to recognise meaning; and it is an essential thing.

Because if our lives, the world, everything isn't designed, then it has no meaning - and the only problem remaining is to explain why, then, we should ever have developed the widespread and resistant that there was or is meaning.

If the world is designed then there was a designer - and we are led to a creator deity (at this stage a deity, not necessarily a god - the deity might be some abstract principle of organisation, a force, the universal and necessary way of things...).

But for us to discern design and meaning is only one step - because Why?

For example: Why is there meaning, how come we, personally, can discern it truly - and what difference does, or should, this meaning make to us?  What are the implications of the truth of design?

Thus meaning leads onto purpose - and those who wish us to regard life as purposeless will therefore always argue first of all that it has no meaning; and that life is some kind of a combination of mechaniscal determinism and statistical randomness  - Life Just Happens - therefore it cannot have purpose.

On the other side, anyone who sees a meaning in life will, sooner or later, be prone to wonder what is its purpose. And for there to be any kind of a purpose to the whole things and ourselves in it, which actually matters - then we are led to a personal deity: a god who has some concern not just for setting-up a created universe but also for us as individuals, and our place in the scheme of things.

From this comes the secondary question of why this hasn't already happened, what is stopping it? This leads onto theories of the nature of God. It also leads to evolution ...

Evolution is about the change, movement, stages beyween then, now and the future; it is about the trajectory and nature of the difference between where we have been and where we are supposed to be going.

All coherent theology is evolutionary, because there is always a gap between what wee are and what we should be - requiring some kind of evolution to get from one to the other.

If we regard meaning pointing to purpose; then purpose points to evolution - we live in a reality which has evoluton built-in; and it would be useful to have some description of how this works: what evolution is like...

The most favoured and comprehensible description of evolution is that it is like growth and development; the transition from foetus to child to adult - the idea that this is a metaphor for the (intended, destined) evolution of everything: an analogy for the nature of reality.