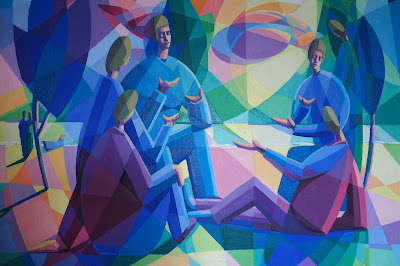 The Philosophers by William Arkle

Edited from Equations of Being: notes on the nature of love - by William Arkle:

The God we are trying to understand is a living God.

There are many dead gods in our culture. The most common one is never described in any specific way and yet it is a part of the attitude which most ‘educated’ people bring to bear on our present day civilisation. This is the mechanical feedback god.

This God is ‘given worth’ or ‘worship’ through the type of thinking which sees all the phenomena of life in terms of an endless series of computer functions. Such an attitude never admits to a state of true consciousness being present in any event, but only to a series of learned responses which are truly a form of machinery.

In such a frame of understanding nothing is ever real in its own right but everything is an effect of one set of things and the cause of another, and in itself is left worthless and empty. What we would take to be our own consciousness is not admitted by this thought.

Instead we are taught that what appeared to us to be consciousness is in fact a series of electrical and chemical connections in the physical brain which compute from storage circuits the patterns of behaviour which have occurred to us. Such patterns are therefore the complete effectiveness of our identity so that we have become the sum of what has happened to us. Thus we ourselves are nothing but a playback system to other playback systems, and all and everything is thus made out to be a complex build-up of accidents which are remembered by the system.

There can be no such thing as individual effort or merit in this ‘scientific’ system and there is no way that we can be creative. What appears in us to be creative is merely the result of circuits of behaviour which have built-up to a degree that they then begin to give-off, in a mechanical way (because they can’t help it), further patterns for further circuits.

This is the dreadful and insidious picture of reality which knowledgeable men are teaching as the proper education for our day and age.


I have used the word dreadful in the last paragraph, because what has now become a common, but often unspoken, attitude in our way of life results in the opposite sense of values to the ones which we arrive at if we believe that we possess a non-mechanical source of consciousness from which mechanical responses to life situations can be eliminated.

It thus becomes possible for me, if living by faith in my God-like reality given to me by the living God and Creator of all creation, to know that I am inserting a deliberate and intentional expression of behaviour in amongst other patterns of behaviour which are otherwise partly mechanical or purely mechanical.

I can then learn to observe exactly where I can inject my true autonomy into life and where I can allow life to behave in a reactive way, according to the mechanical feed-back response nature that it does possess.


The point at issue is whether I have the ‘faith’ in my identity as a God-like Being; a faith which allows me to make my responses to life from that purely numinous reality of awareness and consciousness; or alternatively whether that ability has been crippled in me by the insinuations of the culture I have grown-up-in that such free and responsible behaviour can only be an illusion.

It is the more scientific members of our society who have suggested the mechanical and accidental model of our life.

In practice, however, those who lead us in social and political matters ask a great deal more from us in terms of individual responsibility and problem-solving; but they argue their case in terms that are almost entirely concerned with a close-up, ‘second hand of the clock’ view of life’s purpose; thus throwing us our of context with the deeper and more universal attitudes of our nature, which again are treated as though they did not exist, or are governed by a system over which we have no control.


These deeper attitudes can only come to us, as a means of solving our problems, if we allow the time values that stem from a perspective of 'the minute hand' and 'the hour hand' into our deliberations. The religious and spiritual nature which deals with these more 'timeless' qualities must be seen by us to be the heart and lungs of our whole body of life - and not some strange aberration or emotional illness which has no respectable link with researched and proven data and knowledge of the physical and social sciences.

We are not arguing against these researches, but simply against mainstream discourse failing to set their findings within the context of man’s whole significance - by which failure they often add to the fragmentation rather than the integration of our sense of purpose and value.


From Equations of Being by William Arkle, self-published as a pamphlet, circa 1980.

Of course, the core problem is the hypocrisy of how the concept of materialistic determinism is applied. Every proponent of it appeals to some value or goal that is, without the least apology (since there can be none anyway), presented as being genuinely meaningful, unlike everything else.

If our deeds and desires for good and evil are nothing but the outcome of irrational systems that operate on mere determinism, then how exactly is it that the observation that this is so is not equally meaningless and irrational, a mere accident of waves appearing to leave cursive script on the beach?

@CCL - " Every proponent of it appeals to some value or goal that is, without the least apology (since there can be none anyway), presented as being genuinely meaningful, unlike everything else."

I relate this to the way that self-righteous anger has taken-over public discourse. IN the past, any moral principle had at least a one-step moral justification (e.g. of the 'the will of god/s' type) - nowadays there is not even this. Either the subject is changed (instead of talking about morality/ what is right - people talk about psychology/ what makes some person probably-happy or miserable); or else they reach directly for aggression to try and close down the questioner by *stating* (or, on the assumption that) that they are an evil person who ought to be harmed and shunned (ignoring what they mean by evil, and that indeed they cannot regard as real any concept analogous to evil).

I have experienced this multiple times in my life - and observed it even more often: an absolute refusal to provide a rationale, and very rapidly escalating aggression.

Clearly, there is a sense in which people know perfectly well that public morality cannot justify itself even shallowly, even about a single specific issue; and therefore the efforts to shut down dissent become ever more sensitive and extreme.

It may be that this is the fundamental appeal for most of what is fundamentally a nihilistic viewpoint, that it serves as an excuse to discard opposing viewpoints as 'meaningless'. But an inconsistent and partial nihilism isn't merely meaningless, it's incoherent as well.

@CCL - "the results of practical application of incoherence are becoming pervasive in modern society."

Indeed. And this must be deliberate - an anti-system of lies is what is wanted, and what is substantially already present. It is sad how few are prepared to notice the fact - but then this is a society perhaps more deeply corrupted than any other has been; so much so, that it casually regards itself as superior to all other times and places in terms of realism, understanding and morality.

But ultimately, lies cannot feed, shelter, or nurture us.

Thus to depend on them for real needs is a very painful form of suicide.