The decline from Wordsworth to Byron; from Coleridge to Shelley 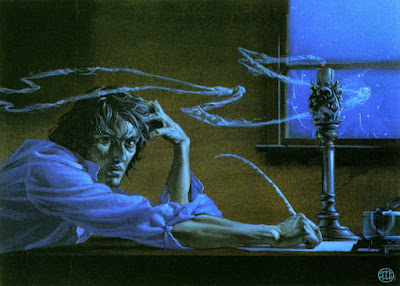 In a post at Albion Awakening, I tackle a subject close to my heart and causal of the deep malaise of the modern condition - namely the rapid corruption of Romanticism from its Christian beginnings to a combination of radical politics, sexual revolution and make-believe.

Since Romanticism was the divinely destined direction for Western Man; this has been catastrophic over the past two centuries - with (on one side) serious mainstream Christianity rejecting imagination, inspiration and intuition - hardening into materialism; and (on the other side) mainstream culture diverging into the instinct-driven sexual revolution and the iron cage of pseudo-rational totalitarian bureaucracy.

As Owen Barfield first understood; one answer is for us to return to the source of true Romanticism - such as Wordsworth and Coleridge, and pick up the threads - and carry forward the Romantic project. And this is no hardship - but a delightsome task!

And it will succeed; because Rudolf Steiner - in his early works, culminating in the Philosophy of Freedom - has done all the heavy lifting for us (with Barfield's later assistance).

The answer is there, waiting; the answer is coherent, beautiful and fruitful; and a world of wonders beckons! - if we want it; and assuming we each make the effort to know it intuitively: for our-selves...