The mystery of the moon 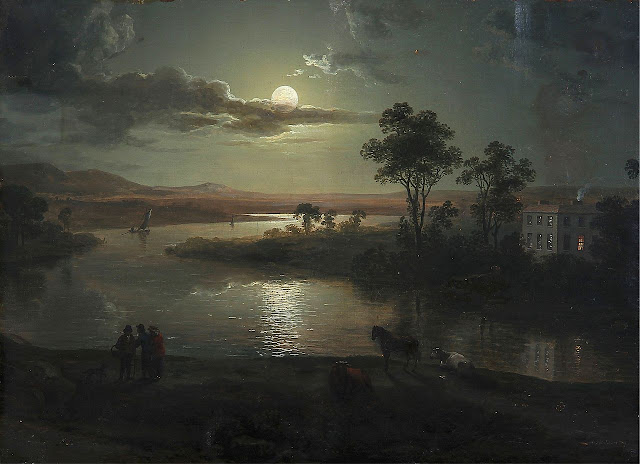 Modern Man regards the moon as trivial - except for its gravitational effect upon tides - which I personally regard as mysterious, since I have failed to understand the 'explanations' of how a gravitational pull can cause a high tide on the opposite side of the earth.

Of course, I personally regard the Moon as a living and conscious being; and have done so for a very long time, although in the past I would vehemently have denied it!

Astronomically it is very mysterious - why is the Moon the same size as the Sun (when seen from earth)? Why does it rotate on its axis at the same rate as it orbits, such that it always has the same face towards us? Why is our moon The Moon) so big, relative to the earth - compared with other planets? How did it get there at all (assuming that the current explanations are indeed the arrant nonsense they seem to be).

It is implausible, impossible, that the Moon could have no effect other than its tides - yet what is that effect? What is the effect that moon light (and its lack) has upon our minds? What is the significance of the Moon's phases?

In sum, what is the Moon's role in human salvation and theosis; why was it placed, and made as it is?

I have a feeling that I already know the answers to such questions, as inbuilt but unconscious knowledge - and I would very much like to make this knowledge explicit and conscious!

I've heard (albeit from sources for whose reliability I cannot vouch) that the moon's gravity slows down the winds on the earth's surface, which would otherwise be one continuous hurricane.

I suspect that the nature of my curiosity is a residuum of the 'physics-y' mainstream metaphor of Christianity which I am trying to reject; because if-since the Moon is alive and conscious, then it would relate to us as a personage, and probably individually - therefore not primarily as a force.

Well, the physical effects mostly are tidal. The Moon is responsible for about twice the tidal effect compared to the Sun, and tides have massive effects on life on Earth both in evolutionary development and within an individual lifespan.

Spiritually, there is a vast import to seeing things by "the lesser light to rule the night". Moonlight forces our eye to see not details but essential forms of both landscapes and figures. The phases of the moon vary so as to invite us forth at a visionary time in which our animal spirit is sleepy and the transformed world fills our spirit with energy and longing for Heaven.

There is a spirit associated with the moon in her phases, and she rules and guides the reproductive cycles and impulses of men and women towards romance and eternal ideals of love and away from crude physicality. Moonlight cycles also play crucial roles in the reproductive cycles of many other species. It is by moonlight that we see much of the sexuality of the natural world expressed in abstractly beautiful patterns that communicate the grand design of procreation being enacted rather than horrify us with bestial mockery of our own animal nature.

There is more, much more, but suffice it to say that the reason having the moon on the opposite side produces high tide is because tidal forces pull the oceans into an elliptic shape (slightly egg-like in the case of the moon, which is quite close). The one end points to the moon, the other end points away, and these are the high tides. The tide is low when the sun and moon are on the horizon (whether the same or opposite sides).

Another way of saying it is that the Earth and moon both orbit around their common center of gravity, and this means that the side of the Earth opposite the moon is subject to a significantly increased centrifugal inertia which is simultaneously countered by a somewhat decreased centripetal acceleration from the moon's gravity. In other words, it is what we call "spin gravity" and works opposite the increased lunar gravity (and significantly decreased centrifugal inertia, the center of mass between the Earth and the moon is actually under the Earth's surface, though this merely exacerbates the differential, rather than being necessary to it).

I feel that perhaps this explanation is more confusing than helpful.

Well, the same might be said of anything one can say about the moon. She is a great mystery, frankly. Perhaps everything important about the moon is fairly difficult to understand.

The moon's positioning and size are such that it precisely obscures the body of the sun, but not the aurora, during an eclipse. Some scientists at Caltech have termed this a billion to one shot, with obvious skepticism that it happened by chance...Also, when a NASA rocket hit the moon's surface, it rang like a bell, indicating that it is at least significantly hollow.

I personally regard the occurrence in my city of two daily rush hours as mysterious, since I have failed to understand the 'explanations' that ascribe the same observable phenomenon (congested roads) to diametrically opposed causes. If the morning rush hour is caused by large numbers of people driving to work, then the time of day when people knock off and drive back home should be marked by a high degree of tranquility.

The sea leaps up that it may greet
The moon up in the sky,
But when the moon's beneath our feet,
The shore and all the adjoining land
Will downward draw the darkened strand
With heavy sigh.

I suggest you explore, with healthy open-mindedness, the explanations of the Moon as given by Dr. Rudolf Steiner ( 1861-1925 ).

Science, with its purely materialistic outlook and self-imposed limitations, will never be able to reveal the spiritual reality behind the Moon mysteries.

All physical phenomena are manifestations of spiritual processes and deeds of spiritual beings of various levels of evolutionary development in consciousness.

The Moon, like all celestial bodies, is a congregation of spiritual beings whose activities manifest as the materially visible sphere we perceive with the 5 senses. All the ancient initiates knew this with great clarity and even actual perception, because of their developed clairvoyant faculties.

Sun, Moon, and Earth were, in past aeons, one single body of substance, and alive with developing beings. At a certain point, the loftiest beings separated off from the less developed in order to advance their own evolution...this was the birth of the Sun as a independent entity. However, this caused the evolution of what we call humanity to experience its development at too rapid a pace. Thus the Moon, as the dross ( that is, the baser spiritual beings ) of the Earth/Moon, was separated off as an independent entity to be a balancing factor...slowing down the development of humanity in relation to the Sun.

The leadership behind this Moon creation was one of the loftiest of the Sun beings, who sacrificed his own station for humanity by becoming one with the Moon. Also the very early teachers of humanity ( non-physical and lofty beings )left Earth with the exit of the Moon...thus the Moon is a colony of sorts for our great primeval teachers as well.

As such the Moon is a reflecting apparatus or mirror for all the cosmic forces, both seen and unseen, emanating from celestial space.

The Moon is most importantly, from the darker side of things, a defense against what is called the Eighth Sphere....which is a sort of artificial cosmos created by darker beings who are at odds with humanty's proper evolutionary course.

Lastly, let me say that just as our physical bodies are merely outer material sheaths for our imperceptible souls, so the Moon is the outer sheath for the spiritual beings, both lofty and gross, who inhabit that region of the cosmos.

@CCL - That is the explanation of tides that doesn't make sense to me!

@Cathari - I have read a lot of Steiner, especially his early philosophy - which I regard as of the greatest possible importance; but I find his detailed accounts of planetary matters, chronology, accounts of other times and places etc to be wholly unconvincing in their precision and systematisation.

@ BM - Yes, the natural units of astronomical time are days, months and years - none of which divide exactly into each other.

I assume that this is a hint that we are not to regard them as primary realities; and that Men are not supposed to be regulated too exactly by them.

(I have previously commented that early Christians made an error in their need to predict Easter. Either Easter ought to be the start of the festival, or esle it should have been detached from the Equinox and Lunar month.

And early Christianity paid heavily for this error and failure - with hundreds of years of disputing over calculations of Easter, and near schisms such as happeneing in England (which disputes, indeed, still continue among the Orthodox).

In William Arkle's Geography of Consciousness (1974) there is a strange and interesting chapter on 'Astrology' - where he makes much of the fact that there is never any exact repetition of anything. He links this to the fact that God wants us to keep learning, and routine and repetition are enemies of this. We don't need to Do anything (move anywhere) to have a different experience every moment of each day, month or year - reality changes around us, influences upon us are constantly changeing; earthly reality absolutely prevents repetition... breaks-up every attempt at routine and habit.

Bruce,
If you are viewing Steiner's philosophical foundations with even a hint of admiration, I can assure you there are no inconsistencies between such and what he says on any other topic or area of knowledge. It is that very fact which has drawn me to him and his ideas: Logical consistencies throughout....an organic whole.

The problem most people have is that they are so deeply immersed in materialistic thinking, that they tend to naturally reject what Steiner says as outlandish and fanciful.

Anyway, I am glad to have discovered your forum of ideas.