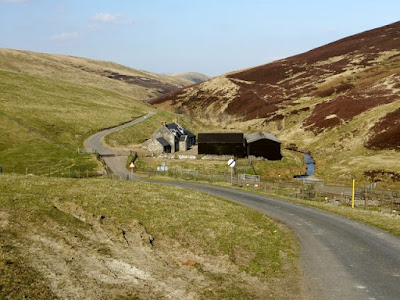 Of all archetypal characters (also, I believe, an historical character - or more than one), perhaps Merlin is the one who most interests and excites me - and I set to thinking about what a modern Merlin would be like.

The original Merlin was probably the last of the druids, perhaps a Christian pagan with one foot in each camp; and one of the last great spiritual leaders who retained the ancient shamanic ability to perceive and work with the spiritual realm - the realm of the 'old gods' and natural entities.

A modern Merlin would be a throw-forward rather than back; he would be one who had moved forward, partly but significantly, to the world of 'final participation' - that is, he would think in harmony with the spiritual world, and thereby his own personal creativity would be woven-into the divine creation.

The new Merlin would be creative, therefore, but in a way that would be knowable only to those who could also follow him across into the new mode of spirituality. He would be working on transforming the matrix of being in which we all dwell, but of which only few are explicitly aware. Nonetheless - he would transform and expand the possibilities for his 'nation' - which nation would, I imagine, be the nation of Albion/ Logres - that spiritual nation of the ideal Britain.

The original Merlin was perhaps mainly a prophet - and this has come down to us as cryptic prophecies of the kind that are only understood after they have come to pass. The main value of this seems to be validation of the wisdom and authority of the prophet, who may then be of value as a counsellor, and adviser for the King.

What would prophecy be like in this time and place, at the end of the age of Ahrimanic materialism? Well, Merlin must be valuable, and that kind of prophecy is not what is needed. Valid prophecy is ignored or denied. And we have no Kings, nor anybody in power that would heed wise counsel (the word wizard is linked to wise). And his wisdom would need to be accessible without mediation of communication media - since he would surely be censored and deplatformed....

Instead what is needed is inspirational prophecy, encouragement - that is, a prophet who will fill us with courage and guide us in the right direction.

So, I can imagine a modern Merlin who would fill the spiritual world with all manner of such guidance and joy; so that anyone who asked for help would be able to tap-into this source. Anyone who was aligned with divine destiny would be able to draw upon the inspiration and courage that Merlin had woven into the spiritual life of the nation - would be filled by that wisdom.

Such a Merlin might therefore be invisible, unknown - he could be anyone, anywhere within the grounds of 'Merlin's Precinct' of Britain, who was doing this spiritual work from which all who were capable of benefiting could benefit. Quite likely he would - in this mortal life, anyway - be known only by what he had done, and not at all by who he was.

A lot of food for thought in that piece, Bruce. Thanks. Your ideas about Merlin are much more convincing than CS Lewis's in That Hideous Strength, the only weakness of that great novel in my opinion. His Merlin was too much a creature of simple instinct and the Arthurian/Celtic/ancient Briton figure was always greater than that.

@William - I rather liked Merlin in that book, and the things that were said about him - Merlin is such a complex archetypal figure that there is plenty of space for many versions within the limits of the archetype - eg. Merlin, like the related character Doctor Who, must be a man! Archetypes are always of one sex or the other.