Is Clevedon the dullest, or most romantic, town in England? 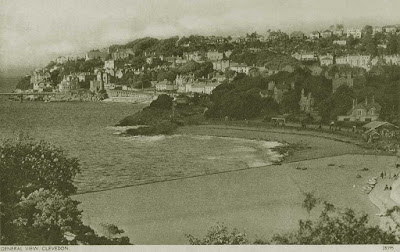 A blogger describing his childhood memories, recalls Clevedon, Somerset, as a place he regarded as 'the most boring seaside town in all England'; and I would have to agree.

For me, as a school-kid, living just a few miles away - it was the dullest of all nearby destinations. It had a kind of grimy, life-sapping quality - despite being beside the sea (the beaches were terrible, the rocks dull), and having a pier (just depressing). The shops seemed lifeless - although I recall a secondhand bookseller where I once purchased a book by Ralph Whitlock on the history of English agriculture.

Therefore, you can imagine how incongruous it seems to discover that Clevedon has a set of Romantic connections that matches almost anywhere of its size, excepting perhaps Keswick. These began with that Architect of English Romanticism Samuel Taylor Coleridge, who spent considerable time in his early marriage living in Clevedon - and Clevedon was where his beloved son Hartley was born.

Coleridge indeed moved house from Clevedon to Keswick - so perhaps he was the factor that made a place a 'magnet' for romantics - at any rate, later on the greatest Victorian poet and Arthurian, Alfred Lord Tennyson, used to visit; probably because his great friend (subject of In Memoriam) Arthur Hallam is buried there.

Then JRR Tolkien chose to spend his honeymoon with Edith in Clevedon, of all places! And just a few years later CS Lewis spent some holiday time there with Mrs Moore and the houseold (who had a family connection with the place) - as documented in his published diaries.

Altogether a mystery! Had there been a magic about Clevedon, that had been destroyed or dissipated by the time I knew it? Was I merely insensitive to its subtle vibes? Or is it just a series of coincidences that the place was a magnet for Romantics?

But then, there are No Coincidences...


Note: recent readers of this blog may not know that there exists an incomplete, lighthearted, childhood autobiography (to which I sometimes add) called Lucky Philosopher.

I can't remember ever hearing of any such place as Clevedon before I read this blog post. No doubt it belongs to the same realm as Puddleby-on-the-Marsh and Little Dribbling.

@Ka - There must be millions of people who have visited Clevedon, and then completely forgotten it.