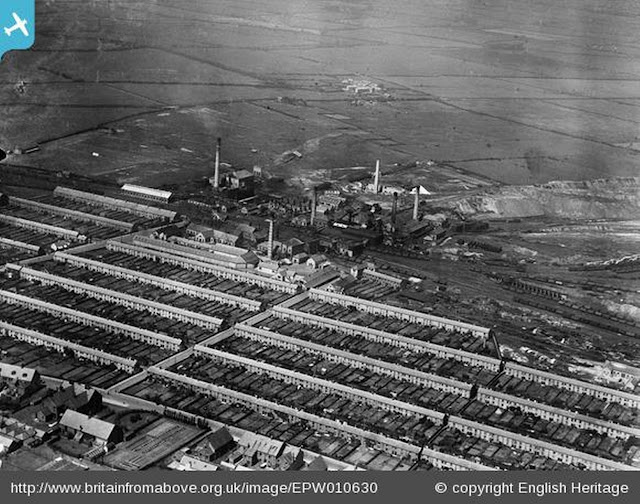 A flattering photo of Ashington colliery and terraces, 1924. In my memory Ashington is always black and white

1966 Football World Cup - the brothers Bobby and Jackie Charlton (no relation, unfortunately) were in the eleven. Bobby is often regarded as the best England footballer ever, and among a handful of the best in the world.

2003 Rugby World Cup - No Ashington-born. The nearest was fly-half Jonny Wilkinson who went to university in Durham and played professionally in Newcastle.

2010 Cricket T20 World Cup - No Ashingtonians. The nearest was captain Paul Collingwood, who came from nearby Shotley Bridge in County Durham.

2019 Cricket One Day International World Cup, from just over a week ago. Regarded as perhaps the most exciting cricket match ever. Featured Mark Wood.

Aside, Ashington was also the birthplace of Sheila Armstrong, perhaps the best English opera and oratorio soprano from the nineteen sixties through the eighties.

Why such a concentration of excellence from such a utilitarian place - established several generations ago and still continuing? It is a mystery - all the more mysterious to those who know Ashington.

Note: My connection is that my Dad comes from the adjacent seaside village, Newbiggin by the Sea (birthplace of James Shepherd, the greatest cornet player ever), where I spent my holidays twice a year through childhood. Newbiggin people rather looked-down on Ashington. To us, Ashington was merely the location of a toy shop (Crisp's?) where we went for our summer holiday present. That's it.

(Well, IS that Albion? Or is it a glimpse of Mordor?)

I worked in Ashington for nearly a year and passed the statue dedicated to England and Newcastle United footballer Jackie Milburn every day.

I have no idea why Ashington breeds great athletes, but I have two conjectures:

1. Miner genes. People from Ashington are descended from coal miners, who were a tough bunch.
2. The ticket out - perhaps young people see sport as a way of getting out the dire circumstances that surround them in Ashington. This phenomenon is quite common in the USA.

Pertaining to the latter guess, I did not find Ashington to be all that dire. On the contrary, the town had a certain rough charm about it. And I found Newbiggin to be rather enchanting, in a plain and gruff sort of way. Of course, I myself lived in Morpeth, which was considered rather posh.

@Francis - Thanks for adding some more recent insider knowledge. I hardly ever get there, even to drive through, since I have lost touch with my relatives who reside thereabouts. I usually point the car in some other direction on my days out.

I suppose there has to be a reason for this, since the numbers are too large to be random; but there doesn't *seem* to be anything about Ashington that sets it apart from many other similar places.

The two England fast bowlers are something of a surprise, since this is a football mad area; but in the past few decades Durham have become a cricket powerhouse to rival the traditional greats of Yorshire, which was previously the northernmost team. In the recent world cup winning side, the majority of the team were originally or currently from the Durham and Yorshire County Clubs.

There are parallels in Wales, e.g. Gareth Edwards - mining town. Also in the musical area. Deprivation, nowt else to do?

@James - Is there any place of similar size with so many? And what is different about the places that are productive compared with those that aren't? As I say, I think there will be a reason but

The special thing about Wales is surely the singers. Just 1-1.5 million people, yet usually there have been approximately as many top-notch operatic-type singers from Wales as from England.

@d - Fixed. Just a typo, not a confusion. I played Rugby Union - compulsory - for seven miserable years at school - https://charltonteaching.blogspot.com/2012/09/memoirs-of-second-team-hooker.html

I am late to this but when I read it, I had just ordered a book called Handball: Wales First National Sport. the description mentions its early popularity in the mining community. It is the wall game, now a court game, as opposed to the field game (team handball). I had thought it was played earlier by the Irish, but I think the book argues to the contrary. The Irish have surpassed us (USA) by making it one of a few national sports. I grew up in a small mining town and noticed it and other such towns outperformed in sports relative to their size. Especially basketball, which requires less players.