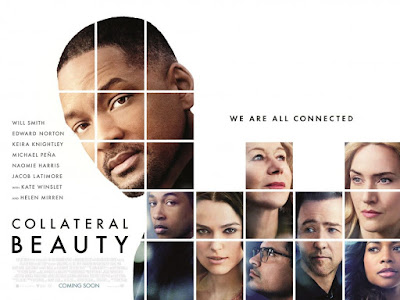 We live in an inverted world when it comes to the arts and entertainment - as I mentioned recently - where a superbly-crafted, thought-provoking and inspiring movie like Collateral Beauty - starring (I would have thought) bulletproof stars like Will Smith (Mr Bankable), Dame Helen Mirren, and Keira Knightley) can be universally panned by critics such that it was commercially killed, made big losses at the box office, and was elected as The Worst movie of the year*.

It is important that the viewer sees Collateral Beauty without prior knowledge, in order properly to appreciate its achievement - so there are no spoilers here; and I would advise you neither to read reviews nor to watch trailers.  Also, you must watch and pay-attention up to the very last minute; or you will miss something vital.

So, I am not going to tell you anything in advance about Collateral Beauty other than that anyone who knows anything about movies can see that it is extremely well-scripted, deftly-structured and directed, magnificently-acted, gorgeously-filmed and tightly-edited.

It is also very emotionally gruelling, due to its theme of the death of a young child and the devastating effect it has on the Will Smith character. Such emotions are neither easy nor pleasant to experience, even vicariously. If you don't want to cry and be wrung-out; don't watch.

More broadly, the movie is about the absolute need for transcendent meaning and purpose in life; and its big 'mistake', its 'fatal  flaw', its gaffe - i.e. the reason that it was universally, viciously, dishonestly and (grossly) incompetently slaughtered by the professional reviewers (their lock-step unanimity being coordinated by orders from above) - is that after raising every doubt and depicting total despair; Collateral Beauty eventually and subtly (but firmly) implies that there really is an objectively-real and transcendent meaning and purpose to Life.

You can easily see why, in our Ahrimanic world; such a movie, aimed at a mass audience, had to be mocked, slandered and crushed. It has become vital to the Global Establishment that any potential source of hope and courage is snuffed-out ASAP, whenever it (unfortunately, albeit seldom) emerges.

CB is not a Christian movie, not at all, although broadly-compatible with Christianity. But it is a good movie; an honest movie that has a very serious purpose of doing good (so far as I can infer).

How such a thing can emerge from mainstream mass Hollywood is in itself quite extraordinary, and very rare. But we must not miss noticing how such an event was dealt-with. Such is the fate of any good person, thing, phenomenon in the mainstream modern world.


*Collateral Beauty's Rotten Tomatoes consensus-approval rating was 14% (one star), in a venue where the (first) sequel to Sharknado got 59% (three stars) from the professional reviewers... Just think about that. I'm not dissing Sharknado - the original movie - which is so-extremely-bad that it's good, and deliberately so. But after watching it the once, I felt, quite strongly in fact, that humankind had by-then seen enough variations on the theme of great white sharks sucked-up by a storm and then falling from the sky onto people. A follow-up was not strictly necessary.