The Anglican shrine at Walsingham - a visit 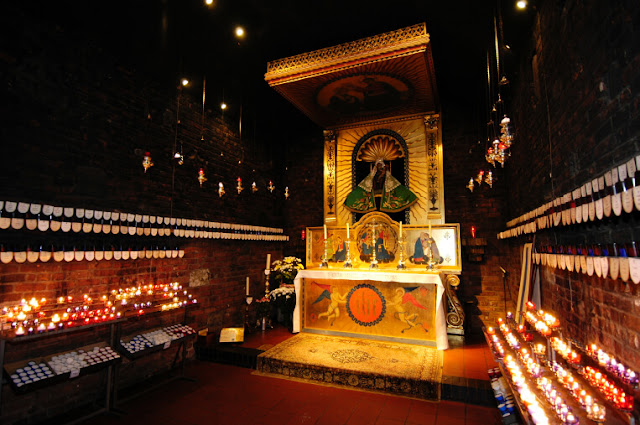 Inside the Holy House

Walsingham, with its shrine dedicated to the Virgin Mary - grew from Anglo-Saxon origins to become the premier pilgrimage site in England during the later Middle Ages; before it was destroyed by Henry VIII in the Dissolution of the Monasteries (he had himself, with his wife, made the pilgrimage as a younger man).

This wasn't a pilgrimage; but simply driven by a curiosity derived from the period when I frequently attended the Little Mass in an Anglo Catholic church, and heard about their annual bus trips to Walsingham. 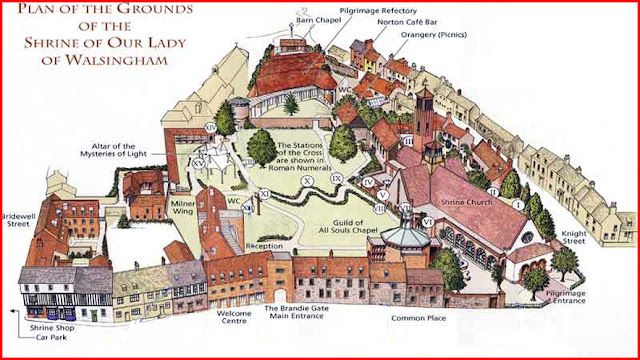 Well, somewhat to our surprise, we liked it very much! There is a small enclosed area with a museum and garden, with stations of the cross leading to an outdoor altar. And there is a chapel and the main church, which is built around a 'replica' representing the Holy House where Mary was met by Gabriel and Jesus was conceived.

These grounds have a powerful tranquillity about them - to step inside is like entering a 'bubble' of calm.

The surrounding small church is decorated with a wonderful and astonishing richness and colour; with a stunning density (for such a recent building) of stained glass, many statues, wood carving, murals, relics, stones from (destroyed) ancient monasteries, a holy well and font, plaques, tombs with carved representations, ornate lettering - and many tiny chapels. 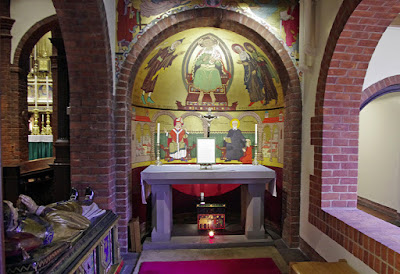 I found it wholly delightful. I am very fond of the architecture of Gothic revival buildings, especially those with a Romantic vision of the Medieval era (such as the chapels at Worcester College, Oxford; or the castle at Lindisfarne; or Walter Scott's house at Abbotsford) - and this was perhaps the best of any I have encountered.

It was charming and eccentric; but also permeated by religious enthusiasm. I would term its building, elaboration, attention to detail and continued maintenance a literal 'labour of love'. 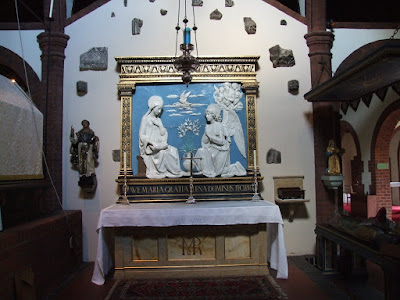 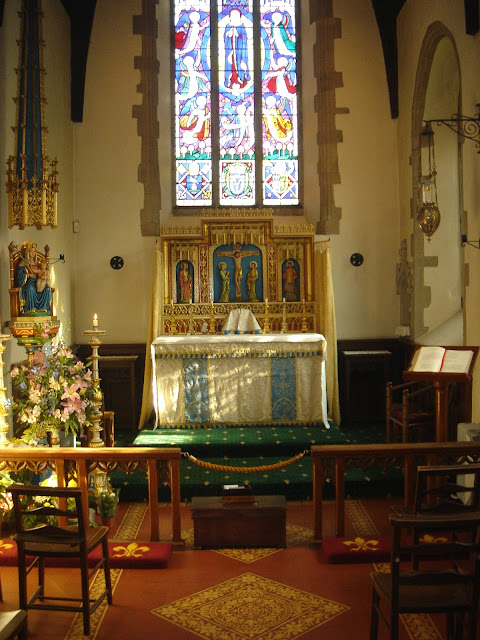 I don't have any very general conclusions as to the 'implications' of my experience; but would simply say that it is well worth a visit, and demonstrates that there was a powerful and active Catholic tradition within the Church of England over the past century and until fairly recently.

A lovely post, Bruce. I'm delighted you found it an uplifting experience. I've not been to Walsingham yet but I'd love to. I'd like to get the opportunity to visit both the Anglican and RC shrines. By all accounts they work together and dovetail really well. My Mum used to visit Walsinglam every year until 2011 when she unluckily damaged her hip there and it put her off returning.

I have the sense that Walsingham is growing in importance as a national shrine. Pilgrimages there are certainly on the up. It could be exactly what the country needs in the years ahead.

@John - Thanks. I also visited Lady Julian's shrine in Norwich (about which I recall you writing)

- St Julian was a bit more of a deliberate pilgrimage, and I found our visit a rich experience of a different kind. I shall write about that on another day.

I attend an Anglo Catholic church in Subiaco Western Australia and Our Lady of Walsingham is often mentioned in the liturgy. I now have a much more inspiring understanding of level of devotion she receives. Thank you.

@I - We arrived just as a well attended (despite being a midweek morning) mass had commenced, and peeped in on it from the side aisles. It looked inspiring and I would have liked to participate.

These grounds have a powerful tranquillity about them - to step inside is like entering a 'bubble' of calm.

That's very interesting to me. The most sublimely "calming" bubble I have ever experienced was this church, in Lebanon:

Doubtless being a Christian church in that part of the world, perpetually perched on the edge of a great spiritual conflict, has lent the place a sense of peace.

In fact to say that the place was "calm" doesn't do it justice, somewhat like Sam Gamgee trying to praise Gandalf's fireworks. It was actually so supernaturally peaceful that even saying it made one want to weep doesn't do it justice. It was so overwhelmingly restful that I did not want to leave and I would say that I have been searching for the same thing again ever since. I am glad that Walsingham is endowed with something of the same blessing.