Not even trying - Beauty edition

Some years ago I wrote a book about science having abandoned even the attempt to speak and discover the truth about reality; but the same story could be told about the entirety of Western civilisation with respect to beauty.


As usual, this has been a top down process. It began about a century ago after World War I with the advent of Modernism is art - in fine art with the likes of Picasso, in Literature with TS Eliot and James Joyce, in classical music with Schoenberg and Stravinsky, in architecture with Le Courbusier and Bauhaus...

These massively influential artists were unlike the geniuses of previous generations because they were not even trying to create beauty.


After World War II this became mainstream; ordinary local government officials, administrators and managers of all kinds became united in their indifference to beauty, even disdain for 'conventional' ideas of beauty, which was regarded as kitsch, outmoded, probably patriarchal and racist too.

The indifference to beauty was initially excused by claiming a focus on efficiency, cheapness, egalitarian social engineering; or that the pursuit was of a higher and more contemporary and forward-looking form of beauty... but it very soon became clear that the motivation was in fact a hostility to beauty.

This can best be seen from Architecture, that most public of arts.


What is significant is not so much the ugliness of modern buildings and the built environment - ugliness has always been common, especially where there is poverty; but the fact (and it is a solid, established fact) that people are not even striving for the beautiful.

In terms of the externals; universities like Oxford and Cambridge were international magnets for students, faculty and visitors because of the beauty - yet they consistently themselves built (and allowed) the erection of vile and brutal buildings among and nearby the loveliness. e.g. the Cambridge History building from 1963: 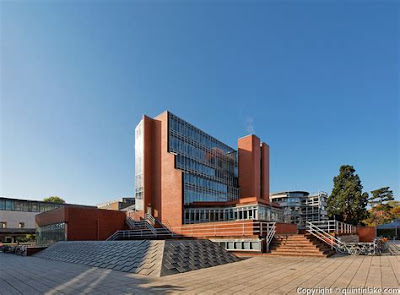 At my alma mata Durham - similarly an architectural jewel; in 1966 the expanding university built a brutalist, grey, grime-streaked concrete box as their students union. 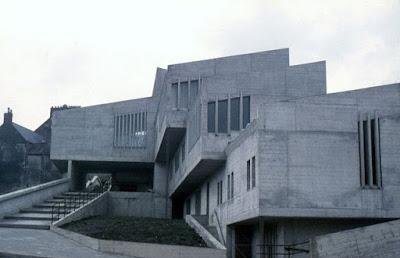 This has, of course, continued and increased - everywhere. In situations where there was every reason - every commercial, monetary, expedient, materialist reason to aim for beauty; ugliness was insisted-upon.

The same applies to the insides of buildings. Instead of trying to make public work and life environments pleasing, cheerful, beautiful - the choice was to aim for bleakness, oppression, noise and lack-of-privacy.

In recent decades, even when building offices for themselves - the places where they will spend many hours per day; management have created nightmarish 1984 conditions. Below is the aptly named Portcullis House, the business annexe to the Houses of Parliament, where Member of Parliament have their meetings etc. They actually made this for themselves, 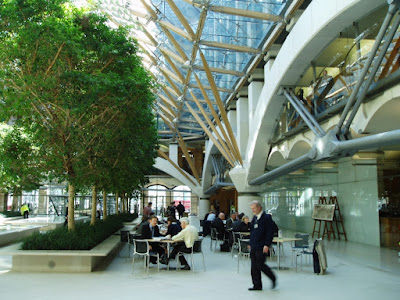 This cost a quarter of a billion pounds 20 years ago: the physical manifestation of an aspiring global totalitarian regime

What can we conclude? As William Arkle said: "If the individual is degenerating then his idea of beauty will be degenerate also".

Beauty is an index of the soul; beauty(with truth and virtue) is one of the prime transcendental values, and an indifference to beauty is a sign of the canker of corruption already present and growing in a person or a group.

By the time active and sacrificial hostility to beauty has become manifest, we are deep into the inversion of values; a situation when beauty and ugliness have changed positions, and evil is being pursued purposively.

We see it all around us. This is a world where Satan rules.

From some angles the Museum for Human Rights in Winnipeg looks more like a Mausoleum for Human Wrongs. In one photo it resembles the severed head of Gort the Robot in The Day the Earth Stood Still:

It's funny how illustrators for science fiction books and movies still seek only to jazz-up Bauhaus further, giving us Art Moderne Bauhaus, cyber-punk Bauhaus, etc., and seldom trying to envision a veering away from it.

As for music, I think Stravinsky created some beauty with The Firebird and Petrouchka, and playfully 'looked-back' to earlier forms with the witty Pulcinella. Schönberg mostly bores me.

At least Romanticism didn't die out right away. The Romanticism of Sibelius, Vaughn Williams, de Falla,and, intermittently, Hindemith has a marked 'stream-lined' quality that is unmistakably 20th (and even 21st) Century without severing the 19th Century roots.

YES, modernism "ruined" beauty along with morality....At the same time society started calling evil good and good evil, the same happened with ugliness and beauty. Now the hostility against beauty is also against fashion and appearance, with women lately not even trying to look beautiful but actually trying to make themselves ugly by shaving their heads and covering themselves with tattoos and piercings. Art, architecture, music, literature...is called "good" if it's dark, edgy, or somehow disturbing instead of beautiful.

This is an excellent post, Bruce. The soullessness and ugliness of contemporary architecture has always bothered me, especially when I lived in North America where beautiful buildings are quite rare indeed. I tend to feel a kind of soul-crushing pressure whenever I encounter brutalist and other awful forms of modern architecture.

You are spot on when you mention inversion. True Beauty (transcendent Beauty) only exists if God is present in the Creation, but modern people have removed God from their hierarchy of values have replaced the Divine with the Values of Utility (government, economics, humanist utilitarianism).

Government and power are the new idols in this inverted scheme, and this is readily perceivable in the blunt, oppressive, un-private, controlling, despair-inducing and ugly spaces that have been and are being created. One need look no farther than the monstrosities the EU has erected to understand the evil driving all of this.

We really are making hell on earth.

I've long assumed that Picasso was merely a fraud while TS Eliot was serious. Be that as it may, you are right that architecture is the most important art because it is the one forced into our sight. So that's where the hangings should be concentrated.

My goodness, probst, you've seen that monstrosity in Winnipeg too! It looks like an extermination facility! If I were making a dystopian science fiction film, that building would feature heavily. I can't believe people in that city can't see the peril to their minds in letting that architectural Isengardian horror dominate their skyline.

I've never been there, but a Canadian YouTube commentator (her name escapes me at the moment) devoted a segment to it as a sample of ugliness, so I looked up photos of it. Photographers manage mostly to make it look impressive as an object but it doesn't look as though it were made to be used for anything other than a set for sci-fi films.

For his miniseries Black Earth Rising, Hugo Blick uses the contrast between the sterility of present-day modern architecture--the International Criminal Court, corporate offices, conference rooms, and law firms, wherein desks and conference tables are dwarfed by expanses of floor, plate glass and stanchions--with the cluttered homey look of a war-crime prosecutor's office in an old London building, to highlight the David vs. Goliath cast to the going's-on.