What if Time is primary, instead of Space? 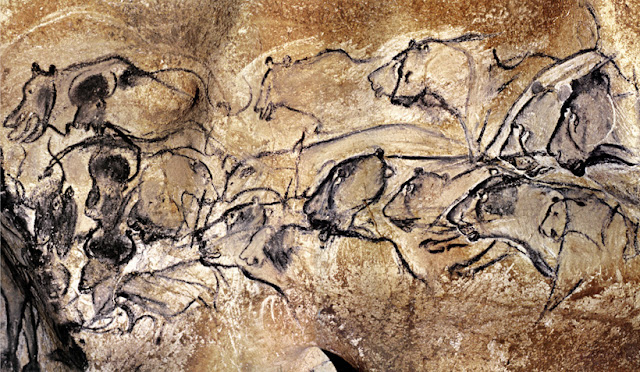 Transformation - a process in Time - has been described as the underlying principle (or assumption) of nomadic hunter-gatherer life and spiritual belief - a metaphysics to which I believe Man is destined to return, but in a freely-chosen and conscious way (Final Participation)

Most philosophy (and classical Christian theology) assumes that Space is primary, and therefore end-up (when pushing analysis to the limit of metaphysics) by discarding Time.

For instance, Plato had the ultimate reality as a Time-less realm of eternal, archetypal forms. Classical Christian theology follows this by making God outside of Time; in an eternity in which past, present and future are one.

But if, instead, we regard Time as the primary reality, then things look very different. Things exist in Time, which means that their reality stretches back either to eternity or to when they are made. Things are not defined by their cross-sectional 'spatial' properties - because they exist longitudinally, through-Time.

What we see now is a probably-ephemeral property of an entity defined as a self that goes backwards... More exactly, the entity is (in physics terms) a process. Its cross-sectional properties may, probably will, change - but it stays itself because it is lineally related to its earlier selves.

More simply, the ultimate entities are Beings, and Beings are distinguished historically. There need not be any specific thing or things about a Being that remains constant through the changes a Being undergoes in Time. It stays the same being, even if everything about it has changed.

In a system in which Time is primary, the 'units' are Beings, and the principle of their continued reality could be described as continuing-Life; and continuing-Life may entail Transformation.

A Being may transform (like a caterpillar to a butterfly, or a Man to a god) so completely that nothing about it remains unchanged - yet it is the same Being; lineally the same and going back forever without beginning.

So which is primary, Space or Time? It cannot be both although it could be neither. The question is one of metaphysics, hence answerable only by primary, direct personal intuition - each for himself. But unless asked and answered; you will merely passively, unconsciously, be absorbing the metaphysical assumptions of others.

I suppose this strikes at the age-old question of "what will we DO in heaven all day", a question that I have never fully resolved for myself except to the extent that clearly, the experience of "time" and of "being" must be somehow different there.

@Matthew - I think that problem is mostly a consequence of the classical theological way of regarding Space as primary - so that people see Heaven as Time-less, perfect hence unchanging, free from any want or need or desire to change anything etc.

Many Mormons, by contrast, regard Time as primary in the kind of way I describe (which is partly where I get it from); and regard Heaven as a place of doing, of change, constant improvement and endless progression etc.

I think this more realistic and imaginable understanding of Heaven also goes with a stronger than usual influence of Heaven upon this life - as described by DJ Davies in a very interesting book The Mormon Culture of Salvation (2000). In this socio-cultural study by a non-Mormon, Davies seems astonished by the effectiveness of the anticipation of Heaven in everyday Mormon life- and he tries to explain this.

Quantum physics, along with string theory, mathematically requires there to be at least 11 dimensions of space.

Even old-fashioned Einsteinian physics says that spatial dimensions and time are of the same piece: space-time.

Even The Doctor described it as "wibbly-wobbly timey-wimey 'stuff'."

So inside versus outside of time is a false dichotomy, as it doesn't take into account a multi-dimensional model.

His inhabiting and transiting multiple dimensions of time solves the "infinite multi-tasking" paradox required by His ability to simultaneously interact of billions of souls.

I thought it was really intriguing that you, Dr. Charlton, said that in reality Space could be primary or Time could be primary, but not both.
And on the subject of what Heaven is like, I had a thought today while I was at work. I'm a production laborer and the foreman is an unassuming person and a hard worker (for a long time I didn't even know he was the foreman). The reason why I bring him up in this context is that, along with the boss, he is the key person who assigns people productive tasks to work on.
So I thought of Heaven as being in the right place so that we can undertake a productive task.
Related to this thought was another thought I had today, not unrelated to the discussion of whether space or time is primary. I was thinking about how Jesus said 'It is better to give than to receive' and I thought after reading this post of how if we think of things in space we could say 'where is the good stuff so I could enjoy some of it' but it is better to take a time view and say, "where I am, what of merit can I produce, what good can I do?"

Plato's forms, and the Hellenized-Christian God, are thought of as being outside of Space as well as Time -- omnipresent as well as eternal -- so I'm not sure Space-vs.-Time is the best way of conceptualizing this. Perhaps it's more a question of whether Being or Becoming is to be considered primary (with the Hebrew for "I AM THAT I AM" being conveniently ambiguous in that regard).

@WmJas - Fair point, but I think that what I say is how people actually think within the classical tradition. People can't think at all without something to hold onto.

The model I put is that rather than linear time, events occur due to the conjunction of circumstances, preconditions. If they are not present at that point in ‘time’, they do not occur. If they are, then it might happen.

@James - This illustrates what I mean - Christians are very willing to 'give-up' linear time - despite that Christianity is structured on actual history, which is linear and sequential.

It is a strange thing to do, on the face of it, except that people started doing it (apparently) within a hundrred or two years of Jesus's death, so we are used to it.

One reason is the intense desire/ need to regard God as absolutely infinite and unbounded (omniscient, omnipotent etc); which creates paradoxes that seem to require the sacrifice of linear time to accomodate (eg Boethius's Consolations of Philosophy).

"All that I have written seems like straw compared to what has now been revealed to me."

I love metaphysical speculation (and hence this blog) however I'm also deeply aware that Heaven ultimately transcends our speculation and that we must fully trust His Word, full stop. Glimpses may be revealed to us (as with Aquinas) yet as Bruce intimates here, the full reality will be so utterly transformative that although the same person, our experiences will be on a hitherto unimaginably higher plane.

@Nova - The problem is that *modern* people have metaphysical assumptions that block any possibility of a Good Life - they reject by assumption God, the soul, life beyond death, spiritual reality...

And people even deny that these are indeed assumptions, but think these fixed beliefs are somehow 'proved by science'.

So, for most of us, metaphysical self-examination has become something close to a necessity, a pre-requisite of even a minimally hopeful life; the required antidote to prevalent hedonism, cynicism and despair.

Time is primary, of course. We encounter Space through Time. Heaven is the continuation of our Time as Beings, in fact, when we come to Heaven we will see that we were already there. Time continues in Heaven, of course. I believed that consciously as a 3-year old, and never doubted it. God is outside time (for the sake of the model he is to that respect 4-dimensional to us as 3-dimensional, just as we as 3-dimensional beings are outside 2-dimensional sheets of paper, but we interact with the paper in its 2 dimensions, write or draw on it in 2-dimensions, and even crumpling it doesn't make it 3-dimensional. God interacts with us at our point in time because we are not in all time simultaneously.

I experience the joy of the creation and the goodness of God every day. I am frequently attacked by hedonism, cynicism and despair, and may let go of hope for this world and despair of the utter stupidity around me, but I soon shake that off, because there already is so much good in this world, like this blog I re-discovered yesterday.

It is impossible for me to reject God, the soul and spiritual reality. Because it has always been there. I was aware of my soul as a 3-year old, and it is a constant within me. I do stupid things, I learn, I repent, but my soul is the same. Life beyond death is the factor that makes life possible, and to deny it is to deny all value of life.