Cantilevered over the abyss 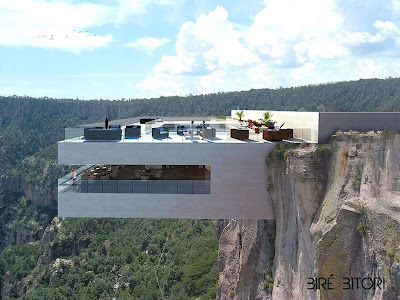 We live in an evil civilisation. On the one hand, it is destroying itself strategically and ever more rapidly; led by a global Establishment in service to Satan.

These are not-even-trying to sustain things - and are instead making an insane world of value inversion, where Good is illegal and ugliness, sin and lies are mandatory and celebrated.

The colossal and multi-inter-dependent superstructure of production, provision, distribution has had its foundations undermined until it hangs-out above a plummeting drop with no visible means of support...

On the other hand, this same corrupt and corrupting materialist and God-denying culture is the only thing capable keeping more than seven billion people alive and functioning.

And this is personal and unavoidable.

It is reality for everyone; because even if you personally happen to be one of the small minority who do not depend very directly and immediately on this vast, complex, coordinated, internationally trading, technologically micro-specialised System to keep you alive and healthy over the short term; plenty of those people whom you most love and value are exquisitely-dependent.

And everyone is vulnerable in the medium- to long-term. When epidemics, famine and warfare are universal; when psychopaths, gangsters, rogue military and feral states run amok; when giga-deaths accumulate - the environment everywhere and for everybody will become unpredictably, massively disrupted.

Then will be a great test. Those who do not know what this mortal life is truly about, what his or her own actual life is about; will quite likely be drawn rapidly into spiralling depths of depravity and damnation. The demons will have their day.

Those whose priority is to follow Jesus through death into resurrected life eternal - who know that their experiences are divinely ordained for their learning, and such learning is directed towards greater spiritual development towards divinity...

Well, any such people will surely make the best of whatever happens to them-selves, specifically.

That photo is a brilliant metaphor for our time. Something that naturally gives you the heeby-jeebies and we’re all supposed to say, “What? It’s perfectly fine. You don’t trust science?”

Just commenting about the unsettling image . . . modern engineering really is marvelous, but doesn't such a structure betray . . . hybris?

About the post, I fear to see the modern world all go, but it really deserves to burn. Such a waste -- and wasted opportunity. A grievous waste.

@Avro and Joseph - Yes. Architecture is perhaps the most (unintentionally) revealing of all the arts. An evil society, an evil bureaucracy, seems always to express that evil in its architecture. Why? perhaps because architecture is (almost always, and the exceptions with prove the rule) a product of The System: that is, a product of bureaucracy and committee decision-making processes.

The comparison of the Twin Towers to the Freemasonic pillars is an interesting rabbit hole.

@jas - Not really - what we have now is something fundamentally new and unprecedented.