Review of The Three Stigmata of Palmar Eldritch by Philip K Dick, 1965 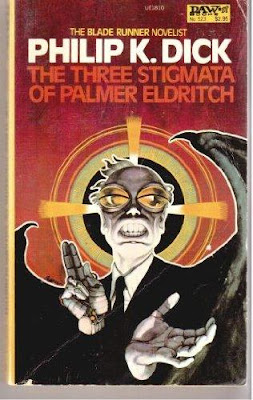 This is an extremely good SciFi novel, which I think some readers will find fascinating. As so often with Philip K Dick (PKD) it is very relevant to the current situation and crisis of the human condition - and there are more fascinating ideas than in half a dozen books by less imaginative and intelligent authors.

The situation is focused on a world in which Earth has colonised Mars and some of the moons of Jupiter and Saturn - by compulsory conscription. Conditions are dreadful in their boredom and deprivation, and the colonists seek brief but intense solace in the illegal (but corruptly Establishment facilitated) drug Can-D.

Can-D provides access to a shared virtual reality (shared among people in the same room) who set-up Perky Pat dolls much like Barbie and Ken, with realistic miniature accessories laid-out in scenarios. Jumping-off from the visual stimulus of dolls, the Can-D users are mentally transported into an idealised Californian lifestyle back on an Earth to which they will never be allowed to return (and which is being incrementally burned-up by what seems to be increased solar activity).

This cult has developed strongly religious aspects - although these are very contested among the characters. Some believe that this is a foretaste of Heaven - and this is interpreted sometimes that the Perky Pat dolls are the religion, or the Can-D; or that this is a religious ritual in a 'Neo-Christian' religion. And some Neo-Christians are opposed to Can-D as a fake religion; not least because the drug is (as such drugs usually are) addictive and loses effect with time - becomes less satisfying; and renders the users despondent and dysfunctional.


Into this situation comes Palmar Eldritch, who is able (through graft and intimidation) almost instantly to replace Can-D with a more powerful drug called Chew-Z that is cheaper, legal and does not need the doll layouts.

But there is something isolating, puzzling and disturbing about the experiences people have with Chew-Z; and Palmar Eldrich (who is apparently a cyborg - as in the illustration above) himself seems to have a big agenda which is probably malign.

The central human character has a rare pre-cognitive ability (he can read newpaper headlines from the future) - but the only employment n which this psychic enables him to earn money, is the mundane business of predicting up-coming fashions; so that his employer can get-in early and manufacture these items before the trends have emerged, and profit from being early suppliers.


This is one of those books in which there is great and mounting uncertainty about what is real and what is virtual - what is truth and what is manipulation - what is good and what is evil. Indeed, the sense of dislocation induced by this book is probably as extreme as any I have encountered; as even (?) 'god' is drawn into the web...

PKD had, I think, difficulty in ending his books satisfyingly - and this book would have had a better narrative structure if it had ended at Chapter 12, rather than continuing for another which serves mainly to increase the already rather bewildering sense of uncertainty. But this was probably more an aspect of the author himself than a technical flaw - Dick was himself both intensely religious and almost-equally sceptical and materialistic; and he never settled on one side or another for any sustained period of time. And he was therefore unwilling to allow the reader to draw any clear conclusions.

Thus PKD's books are best known and most influential for the unique yet recognisable worlds they build, and the impressive intelligence and imaginativeness of their 'issues' and debates, than for the shape of their stories or for their characters. But in my experience (from the ten or so PKD books I have read over the years) they make an often indelible impression.