This is one of my favourite concertos Of All; the slow movement being - in particular - sublime. But not here. In fact, this constitutes a kind of musical assault and battery!

On the other hand, it is very amusing, and it is hard to take your eyes away from the soloist: a certain Maurice Steger who is regarded by some as one of the greatest current recorder players. A striking figure - doing a good job of transforming just about the wimpiest classical instrument into a potential weapon of mass destruction; by means of simian crouches, spasmodic head-butts, jerks and grimaces, and - in general trying to bite-off the mouthpiece and spit it into your face at the speed of sound.

The garb (shiny suit three sizes too small) is apparently modelled on Alexei Sayle, the 1980s alternative comedian; but he looks and acts more like a cross between Andy Serkis and a psycho Croatian assassin with a small man complex. 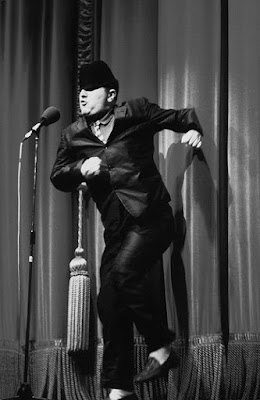 Herr Steger minus his recorder (presumably having been rammed-into some victim) or Alexei Sayle dancing... who knows?

As for the performance... musical it is Not! Playing at-least double the normal speed for human beings, there is no time for anything like tone quality or phrasing - and indeed the slow movement suggests that Herr Steger is far too impatient to worry about such things. He seems to become bored by simply playing what the composer wrote, and so goes-in for the maximum number of rapid and improvised decorations - which certainly keep it interesting!

To be candid, as a strong generalisation I deplore the way that Vivaldi is currently played and over the past thirty years - having been brought up on the 1960s and 70s Baroque era vinyl recordings of the Academy of St Martins in the Fields, English Chamber Orchestra, I Musici, Munich Bach Orchetra, Leipzig Gewandhaus and so on. These orchestras and their genius conductors played Vivaldi, Bach, Handel, Albinoni, Corelli, Telemann and the like; with attention to beautiful tonality and lyrical phrasing, as if it was... you know... music.

I can't find a YouTube recording of this piece that I would regard as living up to those exalted standards; but here is one that is good, and gives an idea of how it could and should be played when musicality is the primary goal.


Better playing from Alberto Domínguez Gálvez; but if it came to a scrap, Steger would wipe the floor with him - probably literally...

However, so long as we are not bothered about the actual piece - Herr Steger has much to offer. And it is fast and virtuosic (albeit replete with fluffs). As Samuel Johnson said: "It is not done well; but you are surprised to find it done at all."

However, I would be too scared to tell Maurice S this opinion face-to-face - nor, if he happens to read this, would I care to bump into him in an alley on a dark night...