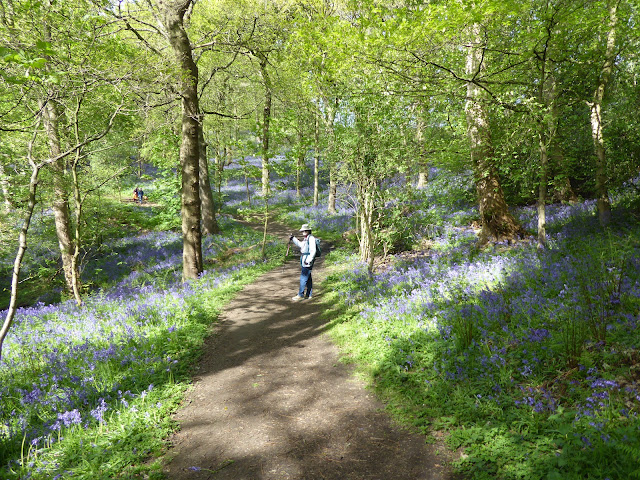 Bluebells are the last of the wild forest flowers in a Beech wood, before the leaf canopy blocks the light. English people are very fond of this plant, and many localities have their own 'Bluebell Wood' named after the appearance at this time of year.
My family generally go to the Bluebell Wood adjacent to Durham City, which also has many glorious beeches and oaks. This year was perhaps the best display we have seen; and the walk was enhanced by eating our picnic next to a Durham University cricket match; and seeing a segment of a rowing regatta on the River Wear.
Coxless sculling pairs were featured as we walked-by; and these seem difficult to steer along the winding Wear, if the number of collisions with the river bank (and a capsize!) are anything to go by!
The last of the wildflowers should come along in the next few weeks, which are the Buttercup meadows - perhaps my absolute favourite flower of all (along with the greenish-white Snowdrops, first sign of the new year). After which we have the Heather blossom to look forward to.
It has been a glorious spring around here, with little rain and some warm days; and the newly leafed trees still have that pale, almost golden as Robert Frost noted, green translucency. Typically, for reasons to do with the solstice and the Atlantic, such springs are often followed by a drenching wet summer...
Presumably, we shall see in due time (if we are spared!).