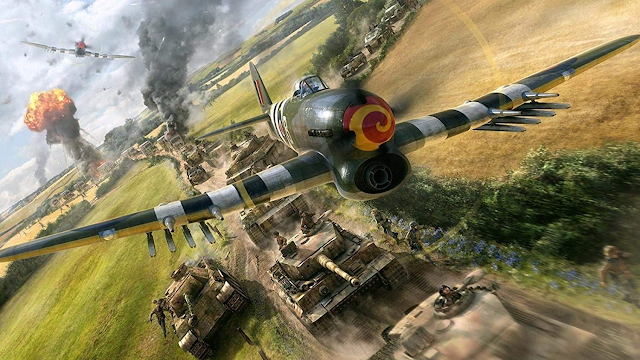 For reasons I can't explain further than "Biggles began it" - I have lately been reading memoirs of First and Second World War fighter-pilots. I can't seem to stop myself...
I have a soft spot for the Hawker Typhoon*; which was initially a terrible aircraft due to being rushed into service in the middle of World War II without time to iron-out its faults. Many pilots were killed from accidents, at first. From what I now know, I would not want to have piloted of these heavy, fast, brutal machines...
Yet its successor the Typhoon II/ Tempest/ Sea Fury was perhaps the best propeller fighter of all; and a joy to fly - but these came too-late to make much difference to the war effort.
Eventually, with the help of excellent pilots, the "Tiffy" made a major contribution to Allied victory; initially by stopping the hit-and-run raids of the (too fast for Spitfires) Focke-Wulf 190; and later making an absolutely crucial contribution to the D-Day landing by destroying tanks, trains, V1-"doodlebug" launch-pads... and essentially anything German that moved in Northern France.
However, my personal enthusiasm for this warplane has nothing to do with any of this; but is based on hearing my Father describe being a child c1943 and watching RAF Typhoons training on the wasteland near his village in the run-up to the Normandy invasion; diving onto dummy-targets, and exploding them to smithereens with rockets - which were a new weapon at that time, and stunningly effective.
Also, to me the Typhoon always looks Just Great. A real warplane: tough and terrifying (for everyone...)**.
So I am mostly able to ignore that it was an emergency botch-job; which was unceremoniously scrapped en masse the instant war ended. The Typhoon was there to do the job, in sufficient numbers, and when it was most needed - all of which counts for a great deal in war. 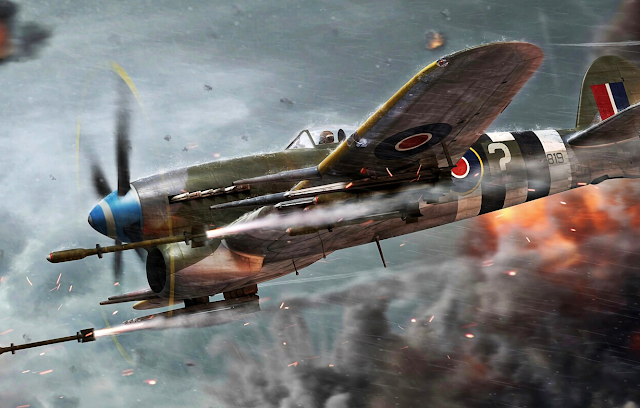 *Note: I have read two Typhoon-focused memoirs: Typhoon Pilot by Desmond Scott, and The Big Show by Pierre Clostermann. The Clostermann story was much the most memorable of these, but less detailed than Scott - who served as a kind of developmental Test Pilot.
**: A list of other aircraft that have this same kind of raw visceral appeal to me; would include the Junkers Ju 47 Stuka, the Chance-Vought F4U Corsair, and the Bristol Beaufighter.
Posted by Bruce Charlton at Tuesday, May 24, 2022

But, thanks to the insignia, it still looks like a good-guy's plane!