A Fairy Story by Marc Bolan 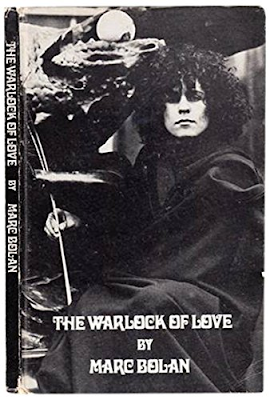 From the Tyrannosaurus Rex album - Unicorn - 1969.

Lionel Lark was an alchemist by profession but he loved to quest.
Li and Mole were a romantic pair. Li, with his many-coloured Zodiac coat flapping about as he rode the Dawn Wind....
Rubbing his rimless spectacles, he lectured Mole in his larkish manner about the mythical Lily Pond and its latitude and longitude, and goofing sometimes, and mentioning the Hyperborians, the frozen folk who lived behind the North Wind.
At eight 'o-clock, he scribbled little spells and directions on a dried mushroom parchment and Moley got proudly into his pigs-bladder balloon. Lionel took off, at first a little shakily, but soon as swift as the lordly eagle, The Emperor of the Sky-skinned Airships.
Bopping through the morning clouds, Kingsley rocked to and fro, now and again straightening his course by adjusting the misty spider's-web rope which was harnessed around Lionel's little puffed-out chest. They made a wonderful sight, these animal Wright Brothers.
A lonely elf crunched the autumn leaves and solemnly dictated to his mouse scribe long, winding spirals of wonderful runes which, in our heavy translation would awaken Ra at midnight, or unhibernate a legion of poley Albino-eyed Hedgehogs or even cause a chasm on the Deeply Swirl of Foxnecks to drown a blessed water lily. Pan be praised for elfish ability to know about wisdom and to use it wisely.
The elf's autumn feet hidden in rose-pettled, pointed shoes walked into The Mighty Grove and his never-ending stream of merriment soared and gushed niagarally through the Wonderful Kingdom. But even as quick as it came, it had ceased. His wise eyes became beacons of true light.
As the piggy bundle tumbled from the blessed heavens, the leaping elf hastily harnessed his beloved, tame nightingale and made for the point of ejection with a heart of many carats. Entangled in thorns and briars was Kingsley Mole... his snout sticking high in the splendoured air, tents of zodiac folds cascaded over Lionel's larkish dome.
Despectacled, he moaned into Kingsley Mole's eyes and cursed all flying machines doomed to rely on the ficklety of piggish bladders.
The two saddened creatures trundled from their rose-bush prison and lay scarlet and fatigued in the escaping afternoon.
The handsome, elvin figure soared through dusking skies and upon landing, kissed the proud brow of his sky steed and called a greeting to Mole and Li. After tea from acorn cups and slices of blueberry pie, the handsome elf told all the large legends that he knew about the perilous pond and its scaley protectors. Also of its healing ability and how one draught of pond dew could put forests of tangling tufts on the baldest badger or field mouses' heads.
After glow-worm talks and plans for the quest, the elf led the tired companions through the foreboding fairy wood until the reached a large, beautifully-worked leather fencing boot, which had a door in its heel.
"My great grandfather," the elf said, as Lionel commented about image engraved on the door knob. "An alchemist you know," said the fairy one.
"Mmmmm," said Li suspiciously.
They were made very comfortable in beds of great expanse, spider web sheets, and towers of warm, wooly moss blankets... and, as always in an elvish abode, dreams of the gentlest texture.
**
This item was a particular favourite of mine aged about 13, and in the immediate run-up to first-reading The Hobbit; and a significant factor in my doing so.
I also read Marc Bolan's book of poems from this year - entitled The Warlock of Love, which was consequence of my first usage of the magical method called Inter Library Loans - borrowed from the British Library (fill-in a card, and get any book you like sent free to your local branch... at that time).
TWOL apparently sold 40,000 copies - which was A Lot for a book of poems; especially by a then-cultishly-obscure musician; but was not reprinted, and has largely been forgotten.
Very much of its time and place, and easily ridiculed; Bolan nonetheless had a way with words (and their sounds) that was his own, and which  left behind a rather appealing flavour.
I find I can't nowadays bear Bolan's music - but I sometimes take another look at the poems: available here. Such as:
We stood there in the youth of our love,
Me asparagus green, you with fortunate gloves.
My rapier staff was of yielding summer oak
And your toes were tongued with dynastys of foxgloves
And we strode tall and long with the scowling winter
Everso gone.
And our hair was as one head, spiraled and twirly
grotto-grieven red.
I am not sure whether all the 'mis-spellings' are deliberate - some are punnish like 'dynastys', but I corrected a couple ('yeilding'?) as probable transcription errors. Although Bolan was supposedly dyslexic, the editor would presumably have been able to correct accidental stuff.
Yes, there is a lot of Dylan Thomas about it - but Dylan Thomas is good! What seems original and good are Bolan's alliterations (of consonants and vowel sounds) and the amusing or surreal little turns such as 'fortunate gloves' and 'yielding summer oak'; and the last line - which sounds autobiographical, coming from Mr Twirly Hair himself.
Posted by Bruce Charlton at Wednesday, June 29, 2022