A picture of God's mercy... 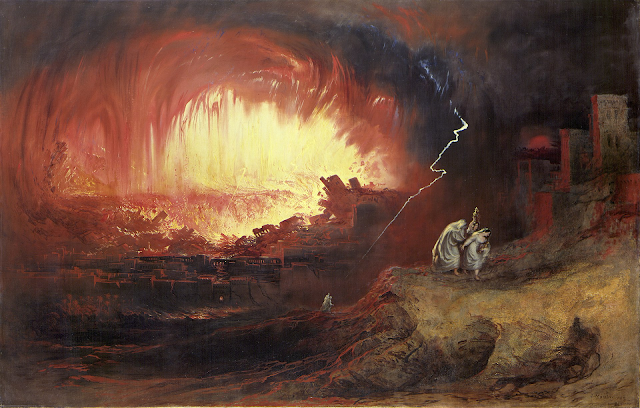 This famous and stunning picture - The Destruction of Sodom and Gomorrah, by John Martin - is in the collection of my local art gallery - the Laing, in Newcastle upon Tyne; so I have seen it several times 'IRL'.

It probably used to be difficult to imagine how such a situation as depicted could be an example of God's mercy for the people of the cities (rather than some idea of 'vengeance') and the world more generally; but I find now this destruction increasingly easy to understand as an act of mercy.

A society, a civilization, can get itself into such a terrible situation of value-inversion that its public, official, approved and legally-enforced morality becomes the opposite of truth and goodness. And at the same time many of its people are so hollowed-out by Godlessness that, far from resisting evil, they regard evil as something to boast about - and indeed feel great personal self-satisfaction by advertising their own de facto affiliation to powers of darkness.

The spiritual (let alone material) consequences of such a situation will be one of evil feeding upon itself and growing, such that the scale of evil escalates - with new horrors being  continually discovered, only to be surpassed.

And there is no escape even in death; since the mass of people will die in despair, fear, resentment, pride or despair - consenting to, or actively desiring, appalling post-mortal situations for their souls (yet regarding these as desirable!).

God's mercy for such a civilization may take the form of a swift and decisive termination of this positive-feedback cycle of evil - swift... but with the end allowing just enough time for a suddenly dawning realization of truth to offer the best possible (although, unfortunately, still remote) chance of repentance.

I think it is important that we can at least understand how this may be so - such that if, or when, such a merciful situation ensues; we can realize what is happening, and act appropriately.

It seems to me a very very few will have the "what have I done moment" that the character played by Sir Alec Guiness has in the film Bridge Over River Kwai.

Interesting personal connection -- not to the painting, but the story of Sodom and Gomorrah in the Bible. I once had a professor who interpreted God's turning Lot's wife into a pillar of salt for looking back at the burning cities. In my esteemed professor's view, the action of Lot's wife exemplified compassion. The whole thing struck me as wrong when I heard it. Now I know why.

To me, the me the most pertinent part of the story is where Abraham intercedes on behalf of (the potentially) "fifty righteous" who might be destroyed along with the wicked....
He actually becomes indignant towards God, "Far be it from You! Shall not the Judge of all the earth do right?"
Abraham then humbles himself, yet proceeds for ten verses 'haggling' the number downward...

"Genesis 18:22-33
New King James Version
22 Then the men turned away from there and went toward Sodom, but Abraham still stood before the Lord.

26 So the Lord said, “If I find in Sodom fifty righteous within the city, then I will spare all the place for their sakes.”

27 Then Abraham answered and said, “Indeed now, I who am but dust and ashes have taken it upon myself to speak to the Lord: 28 Suppose there were five less than the fifty righteous; would You destroy all of the city for lack of five?”

So He said, “If I find there forty-five, I will not destroy it.”

29 And he spoke to Him yet again and said, “Suppose there should be forty found there?”

30 Then he said, “Let not the Lord be angry, and I will speak: Suppose thirty should be found there?”

So He said, “I will not do it if I find thirty there.”

31 And he said, “Indeed now, I have taken it upon myself to speak to the Lord: Suppose twenty should be found there?”

So He said, “I will not destroy it for the sake of twenty.”

32 Then he said, “Let not the Lord be angry, and I will speak but once more: Suppose ten should be found there?”

These verses stand out to me as an indicator of God's willingness to consider other perspectives in His plans. I can't help but wonder if perhaps we are meant (or needed), here in these 'end times' to invoke His merciful intervention through intercessory prayer...

Personally I'm with Dr. Charlton in feeling that an instantaneous conflagration (ala Sodom & Gomorrah) truly is a mercy compared to a long drawn out apocalyptic, ultra violent, 'end of civilization as we know it'!

I want better for our children than some "Mad Max" survival of the 'fittest' (likely the rabidly insanest) world scenario.

What if (for whatever reason) the 'demonic' has become so powerful in this world - that we have to pray for miraculous intervention in order to 'open the way' for the Powers of God to provide such?

"that we have to pray for miraculous intervention in order to 'open the way' for the Powers of God to provide such?"

- My immediate reaction was that instantaneous conflagration is something that God could do 'to' us, without need for us to open the way. There is also the possibility of God simply 'allowing' the most destructive of evil-motivated Men to thwart their own schemes.

The trouble I find with praying for instantaneous conflagration is that we are asking God to destroy other people, some of whom may yet repent and be saved - and presumably that is exactly why God has sustained them alive.

In sum, I think this is one of those things that only God can judge - when it comes to large numbers of people; although we may know the situation for our-selves, and when things are close to home and small in scale.

Oh my goodness! I really am terrible at conveying my thoughts in writing, so sorry!!!

I did not at all mean that we should be "praying for instantaneous conflagration", as I certainly agree with you Dr. Charlton, that it would be "asking God to destroy other people"!

The comment as a whole was meant to convey two separate ideas - agreement with you that the conflagration of Sodom & Gomorrah (or like situation) would be merciful...

And then the idea (along lines of thought about which you've written many times) that as believers are meant to be co-creators with God -
- we might read the part of Abraham's story which I quoted, as a sort of 'allegory' for using intercessory prayer to present to God both our perspectives and our 'suggestions' toward 'creation' alternatives to world events.

So, in writing this:
"What if (for whatever reason) the 'demonic' has become so powerful in this world - that we have to pray for miraculous intervention in order to 'open the way' for the Powers of God to provide such?"

My intended meaning was that perhaps, we are 'needed' in these 'end times', as "co-creators" to create openings by which Powers of God might enter the physical world in order to once and for all defeat the demonic powers...

...and perhaps grant our children a future wholly (so far) unimagined.

Honestly, I'm so sorry I'm not a more capable writer - I know I take up far to much time and space attempting to adequately corral, and put into words, an extremely broad range of connected thoughts!

Also, my apologies - I keep forgetting to sign my name.
Carol
p.s. I want you to know how truly grateful to God I am for having discovered your writings!!
Back in 2018, thru 'following' a series of links related to a search on Tolkien and spirituality, I ended up first at your "William Arkle" blog, then "Albion Awakening", and from there, so many wonderful bloggers whose writings I have truly been so blessed to experience (particularly John Fitzgerald, William Wildblood, Francis B., William T.), and of course all your additional blogs!

Thank you Dr. Charlton for 'introducing me to' such an amazing array of incredibly spiritually valuable 'pondering' materials!!!

Thanks for your comments, I'm glad you have found stuff worth pondering. It was interesting to discover that you came to the Romantic Christianity blogging group via the Arkle blog, which is one of my *least* viewed blogs (although one of my favourites!).

This perspective could be applied to the Global Flood. The idea of God regretting the creation of mankind and wiping out the vast majority of them is very unsettling. However, the Holy Spirit brought me to 1 Peter 3: 18-20 in which it's stated the Christ preached to the spirits of those who drowned in the Flood. Whether any of the souls repented is not stated. However, each person had the opportunity to come face to face w/ Christ. Many people must hit rock bottom before they can repent.