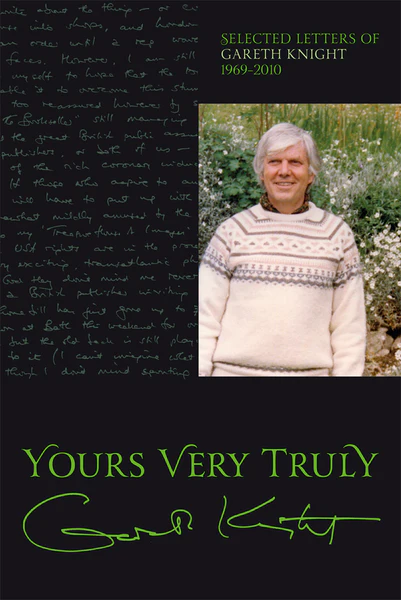 I have just heard that Gareth Knight - real name Basil Wilby - died on 1 March of this year at the ripe old age of ninety-one.

Knight was a continuation of the 'pantheon' of Romantic Christian writers - and was for me, after the death of Geoffrey Ashe, a strong candidate for Greatest Living Englishman; albeit holding that title only for a few weeks...

And now that GK has left this mortal life, there are no obvious candidates to take over the role.

I have written about his work several times on this blog; and William Wildblood wrote about his books on Albion Awakening. GK was a ritual magic practitioner, scholar and author - probably the most known and respected 'magician' in the British Isles.

(Despite or because of which; his passing seems to have gone unremarked in the mainstream mass media.)

William and I agree that Experience of the Inner Worlds is probably the best of his many worthwhile and enjoyable books. Others I especially liked included his autobiography I called it magic, and The magical world of the Inklings; also his books about Dion Fortune (to whom he was probably the spiritual successor); these served to introduce me to the life and work of this brilliant and appealing woman-genius.

Knight convinced me of two things.

First; by his life, writings and example; that magic could be a valid path of Romantic Christianity; albeit that the roots in Christianity seem substantially to have disappeared from contemporary magical practitioners - and indeed a hostility is more evident.

(Like all institutions over the past century, the world of ritual magic practitioners has by-now 'converged', and substantially assimilated to (subordinated to) leftist politics.)

Secondly; that the power of ritual magic dwindled through the twentieth century.

Magic began as practiced by highly organized and hierarchical societies, practicing formal rituals that reliably producing highly objective-seeming results; and being almost a vocation (like a priesthood). But later, incrementally, magic became more improvisatory, more subjective; and more dependent on charisma, surprise, shock, even trangressions; in effect more like a dramatic pageant, a 'happening' or avant garde performance... and the effects more psychological and interpersonal.

Therefore my conclusion, overall, is that magic was, but is no longer, a possible and effectual spiritual path for Christians.

This because of the waning objective power of ritual, symbol, allegory, disciplined mental-training etc; but also because of the corruption of institutions and the consequent necessity (and waxing power) of individual human consciousness - of 'primary thinking' - which is free, generative, creative and more fundamental than externally, or socially, defined structures.

I didn't know Gareth Knight had died. He was the best writer on magic over the last 50 years and definitely on the side of the angels unlike some in that world.