I can't believe somebody actually did this, on purpose 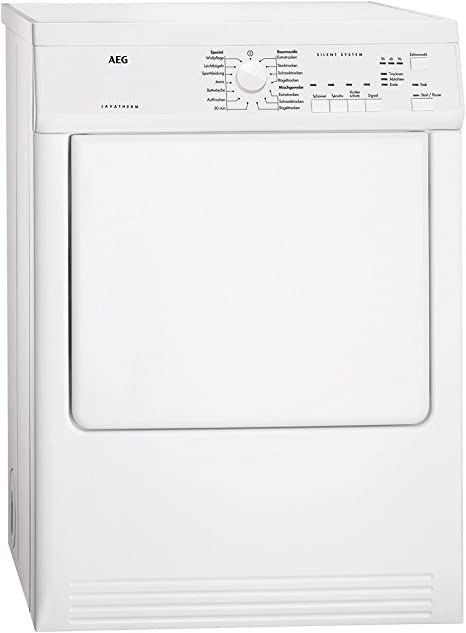 We have a tumble drier with a "buzzer" alarm (five ascending notes with a needly kind of electronic tone) that tells you when the washing is as dry as you want it to be.

So, you hear the buzzer, go to the machine, open the door to get the dry washing... and the alarm sounds again: triggered by the opening of the door.

Get this: you are actually in the process of opening the door - and the alarm sounds to tell you to open the door...

What kind of person decided that it was a good idea to install such a mechanism?

What kind of person then sits down to design a device to tell people to do something that they are actually in the middle of doing?

What kind of consumer expert imagines that this will be a popular feature?

What kind of a world are we living-in - that such things happen, yet nobody is called to account?

I imagine it's intended as a safety feature to warn that the inside of the dryer and contents are hot, in case the person opening it did not hear the initial alert. Tumble dryers have gained a reputation for overheating in recent years, so the manufacturers have an incentive to add features like this.

Must be the same person that designed our dryer which defaults to the highest possible setting everytime, which I feel is a disaster waiting to happen.

@HF - Don't try to excuse insanity - there has been a cooling cycle before the buzzer sounds. No burnee.

@D - It's obvious. A low temp default could do no worse harm than wasting time, whereas a high default could damage or destroy the clothes. So set it for high, natch.

Likewise, when we put our Toyota Prius into Reverse gear, it sounds a warning beep, *inside the cabin.* It cannot be set so as to beep outside the cabin, where it could possibly warn a pedestrian that the incredibly quiet car - which I love - is about to back up silently. Why warn the driver that he has just intentionally put the car into reverse? It makes no sense.

Because the capitalists want to break the proletarian will so that he becomes an obedient worker. Just like bureaucratic hurdles. It's all part of a bigger plan. It's time to rise up, the proletarians have nothing left to lose but bad washing machines

Pretty much every microwave oven I've dealt with over the last decade or two has an infuriating feature: once the heating is done, it beeps once per minute until somebody comes to open the door. It will do this for hours if I don't have a moment to get up.

Who is the engineer who first decided that the microwave oven should be the master of its owner? I hope that man is still alive, so I can find him and speed his passage to Hell.

Perhaps all these 'machines that go Ping!' (as Monty Python termed it) are part of fostering the illusion of Artificial Intelligence - the idea that machines are 'aware' of us, 'know' what we are doing, and 'talk back' to us.

It is a profound irony (or, more likely, gaslighting) that in a universe where everything (including ourselves) has been officially interpreted as purposeless, dead and unconscious, passive and/or random -- there are so many novels, movies and tv programmes telling and shoing us about computers and robots that are depicted as alive, conscious, empathic.

Like the damn "talking crosswalk" that tells me to "Wait" before I cross the street, and then says "You may now cross the street."
I'm used to the "beepers for the blind" version...but the "tells me what to do" version is just an electronic nagging wife.