Taliesin - Bard of Britain. Written by John Fitzgerald and illustrated by Rob Floyd 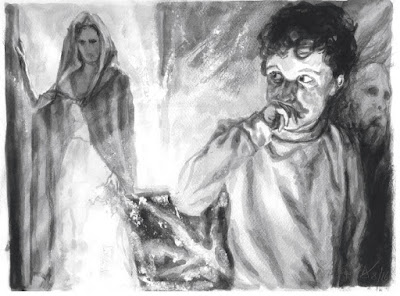 There is a treat for those who love Welsh and Arthurian legend over at Albion Awakening - written by John Fitzgerald and illustrated by his friend and collaborator Rob Floyd:

The story of Britain unfolded before my inner eye, unfurling like a tapestry or scroll. It was a magnificent tale, tainted here and there by materialism and greed, but powered in the main by courage and creative flair. I saw as far as the Dark Time and the light that shines beyond it - the spiritual blindness that beset the land, the implosion of the House of Windsor, then the War of Contending Flags - black and multi-coloured - that laid the Island of the Mighty waste. And then that winter dawn when a King of ancient line returned from the East, stepping down from his ship at Thanet as the Romans did of old. A universal shout of joy rang out across the realm and that night Arthur's Beacons were relit, from St. Michael's Mount to Flamborough Head. Next day the rumours began - from Devon and Cornwall - that Jesus Himself was back, walking along the rocky shore, telling stories, healing the sick, and giving bread and wine to rich and poor and good and bad alike.

The whole thing is at Albion Awakening