Could Rudolf Steiner have become a Professor (instead of joining with the Theosophists)? 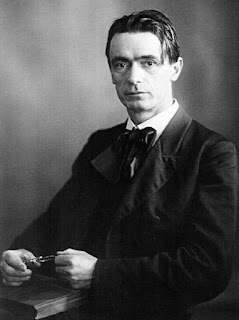 I always wondered why Rudolf Steiner did not (so far as I know) try to become a Professor; since the scholar's life would probably have suited him a lot better than being the leader of first Theosophical then Anthroposophical Society groups - and lecturing (on every topic under the sun) to the general public.

But as I consider the matter, I do not think a German Professorship would have been a possibility for Steiner - although I suspect that, if he could have developed sufficient proficiency in the English language, he would have walked-into a Professorship in the Anglosphere.

The first difficulty was that Steiner's editorial work on Goethe's scientific writings was controversial, and criticised for being insufficiently scholarly (lacking the usual scholarly 'apparatus'). Another problem was that Steiner was awarded his PhD from Rostock, which (I gather) was among the couple of least prestigious ('lowest standard') universities in Germany.

Then he did not proceed to work on his higher/ post Doctoral 'Habilitation' thesis - which was necessary to teach in a German university as a Privatdozent (an unpaid position occupied while waiting/ hoping for a 'call' from the Ministry of Education to occupy a Chair). Steiner also lacked the  private income or family backing, as well as the network of upper class supporters, needed to take this long-slow-risky career path.

Steiner's PhD was published in 1892 (Truth and Knowledge) and his magnum opus, the work of his heart, Philosophy of Freedom in 1994 - but both failed to attract approval, or even interest.

On the other hand, Steiner's qualifications and publications were extremely good by the standards of UK and US universities, and in that sense he could surely have obtained an academic job there, or in many other places other than Germany (which was without question the premier university system in the world, at that time).

But I presume Steiner either could not or would not move from the Germanic nations - he was consequently unable to make a living, despite trying a few careers. When the chance for paid lecturing came along, he grabbed it and made a great success of it.

Nonetheless, intellectually and spiritually speaking, I would have to regard it as a mis-step when Steiner allied with the Theosophical Society, and began to generate spiritual science in accordance with Madam Blavatsky's channelled revelations... He made a further error in getting 'mixed up with politics' from 1918, with his 'Threefold Society' ideas...

I think it took Steiner until 1924, and after he became terminally ill, before he began to rework his ideas in some very interesting (incomplete, not followed-up) directions in the Autobiography and Anthroposophical Leading-Thoughts/ Anthroposophical Guidelines...

A subject to which I will return soon, I hope.

But I regard it as a matter for regret that Steiner was, in a sense, 'forced' to make-a-living by becoming a spiritual leader - it would have been better for him if he could have remained a Dichter und Denker (poet and thinker) - a scholar-intellectual.

Thank you. I never knew that such an obviously brilliant man had little chance of an academic career in the German academic world.

Igude - I have worked this out for myself - Steiner's biographers that I have read seem to have somewhat avoided the subject, or else it was too obvious for them to mention.

In Germany at that time, to become a Professor was equivalent to being ennobled in terms of public esteem. But in the USA and the UK, professor (or departmental Chair at a nationally recognised college in the US) was only about the level of being Headmaster of a good private school.

It was Alasdair MacIntyre's The Rival Versions of Moral Enquiry that clarified for me that university professorships had a very different role in earlier centuries. David Hume nowadays has the reputation, in some quarters anyway, of being the greatest ever British philosopher - he and John Locke are eighth and seventh in Charles Murray's all-time rankings for Western Philosophy in Human Accomplishment.

Yet Hume was rejected when he applied to be Professor of Moral Philosophy in Edinburgh, and an unrememberd person called Cleghorn appointed instead

However, there were in fact very good reasons for them Not to appoint Hume to this position which was seen as pivital to the moral self-understanding of the educated public in Presbytarian Scotland - Hume really was Not a suitable person for that social role.