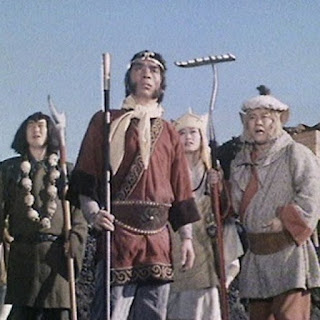 For inexplicable reasons, I have become a-bit-obsessed with the medieval Chinese adventure story Journey To the West (apparently the East Asian ubiquitous cultural equivalent of the King Arthur legends in the Anglosphere); which I uncomprehendingly and ironically often sampled as an undergraduate* via the (very-) dubbed BBC series Monkey, illustrated above and sampled below:

Apparently, in the 1970s bushy sideburns were sufficient to indicate a monkey - why not?

This series was - mostly - a case of 'so bad it's good' - but also it has many endearing aspects: its heart is in the right place, and there is a genuine folk-wisdom thing going-on. The very amusing narration, in a totally-OTT 'oriental' accent, also includes quite a lot of genuine Buddhist wisdom!

I also watched, with enjoyment, a 2015 movie of the first part of the story called The Monkey King; which includes a remarkable and moving (and monkey-like) performance of Monkey by a certain Donnie Yen. 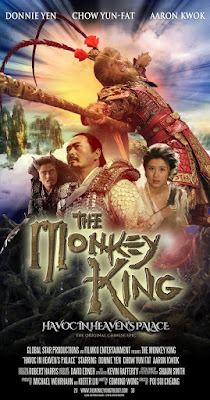 To give all this some grounding - I am currently well-into Monkey, the classic abridged 1942 translation of Journey to the West by the great Arthur Waley - which opened this universally known story to an English speaking audience.

﻿*I must also admit that the actress Masako Natsume, who plays the (male) monk Tripitaka, was another significant reason for watching - since she had one of the loveliest faces I have ever seen. Sadly, she died just a few years later, of leukaemia.
﻿
Posted by Bruce Charlton at Friday, January 12, 2018

I second the recommendation! I'm hoping soon I'll be literate enough in Chinese to tackle the original.

I read the book at school (we had a good library) and looked forward to the TV programme when it came out which must have been the mid-80s. What a disappointment! Keep with the book, I say.

@WmJAs - I guessed this would draw a comment from you, as this blogs resident expert on such matters.

@William - Well, when a book is excellent, it is *always* better than the movie/ TV adaptation. And certainly I could not *recommend* the BBC dubbed Monkey - but I liked it anyway, and am currently watching some of the early episodes which I bought on DVD.

The 2015 Monkey King movie, however, has some very affecting moments, bringing a tear to my eye; so (despite its gratingly garish CG special effects) I *would* recommend that one. And Donnie Yen's performance of Monkey is Oscar-worthy; as good as Andy Serkis in the recent Planet of the Apes movies (which I would also recommend).