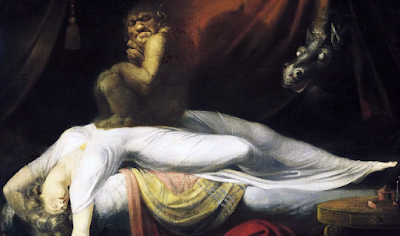 People holding the materialistic view of life have no idea to what man is exposed between going to sleep and waking. He is actually exposed to these beings who persuade him in his sleeping state that good is evil, and evil good. The moral order on Earth is bound up with the human etheric body, and when man sleeps, he leaves his moral achievements behind him on the bed. He does not pass over into the state of sleep armed with his moral qualities.

From a 1922 lecture by Rudolf Steiner

This passage, which I encountered in a book collected some of Steiner's writings about sleep, stuck in my mind and triggered reflection on the topic of evil dreams.

Sometimes - quite often - I behave in a evil way during my dreams. In one sense this is hardly surprising, because I (like everybody) have much evil in my heart; so why wouldn't it come-out in dreams?

On the other hand, if we respond wrongly, then we will move away from divinity - and this was encouraged by the 'Freudian' idea that the evil we do in dreams is evidence of fundamental hypocrisy, and proof of each of us being 'really' depraved - dreams reveal the true self.

You may recently have seen in the newspapers some interesting and thoroughly well-founded statistics. It was stated that criminals in the prisons have been found to have the soundest sleep of all. Really hardened criminals are never tormented during their sleep by bad dreams or the like. This only happens when they dip down again into their etheric bodies, for it is there that the moral qualities lie. It can much more easily happen to one who is striving to be moral, that through the constitution of his etheric body, he carries over something into his astral body and is then tormented by dreams as the result of comparatively trifling moral lapses. But generally speaking it is a fact that man does not carry over at all, or only to a very slight extent, the moral constitution he acquires during earthly existence but is exposed during sleep to the beings just referred to.

So, Steiner suggests that spiritual progress during waking life is not carried-over into dreams; indeed there is a sense in which there is a reciprocal relationship whereby the better the waking Man, the more evil he experiences during sleep. (This made me think about how CS Lewis, a good man, was terribly plagued with nightmares.)

But Steiner goes further in attributing some dream evil to demonic (specifically Ahrimanic) beings. He says that awake-good people (at least during this consciousness era) are especially exposed to these ultra-materialistic anti-spiritual beings whose aim is to prevent men taking the next developmental step.

It isn't clear to me from this lecture - but often Steiner sees Ahrimanic beings as providing the challenges and threats - the necessary resistance - which modern man needs in order to grow.

If Steiner's view is broadly-correct, then it seems we must continue to suffer the misery, fear, disgust and shame of evil dreams - for our own ultimate good. The point is not to stop, ignore or be afraid of these dreams; but properly to understand them, and constructively to learn from them.

In addition to evil dreams and regular dreams, where the main impression is incoherence, with no sense of deep meaning, there are whaq I would call numinous dreams.

I think some of Tolkien's dreams and certainly the dreams in the Bible such as Joseph's or the Magi's would fall into that category.

They must have felt completely different from normal dreams such that someone would know immediately that he was having a numinous dream.

I suspect these dreams are very rare, though, much rarer than the evil dreams described by Steiner.

One thing I have noticed is that if I am poised to commit some kind of evil act, or be complicit in evil, during a dream, it frequently does not even occur to me that I could do otherwise than evil - that I actually have a choice about whether to participate in it.

If such a notion does occur, it is usually as a distant, faint suggestion emanating from the very margins of conscious thought, like a quiet vocalization somehow borne to me on the wind from afar - certainly not a full-blown moral imperative, something with strong emotional associations, or that seems obviously or definitely preferable. I can nevertheless resist participation in dream-evil when the thought that I might do so actually occurs to me in the first place, but this takes a considerable effort of will, and is normally attended with various oppressive physical and emotional sensations.

I won't go into details for now, but these can be sxtremely unpleasant and are often overpowering in their magnitude. It is tempting to speculate that I am in some way being "punished" by whatever entity brought me the dream-evil in the first place for my refusal to comply or behave as expected, though what bearing this has on what I "should" do while dreaming is harder to fathom.

A rather passive participation in evil as though listlessly choosing to continue viewing a disliked movie is probably the default, though it is possible to choose it more actively too. When I participate, passively or more willingly, I normally do not get any particular negative consequences, besides an unsettled mind upon waking, at having done something in the dream-state I would not normally consider (or would find actually repugnant) in waking life.

Bruce - do you have any particular view of dreams (or dreamlike states) that involve directly experiencing the presence of evil entities, such as incubi?

@H - That sounds similar to my own experience - good description.

wrt incubi etc - I don't have formed views; but by baseline assumption is that if they are present (whatever they are), they would either be invited by us (against God's wishes); or else permitted by God because of the good that the experience might/ should do us.

(I can't see God allowing our dreams to be invaded by demons who could corrupt us while we are helpless - that would not be the way that creation was set-up.)

Just the other night, I had a dream in which I was being nudged along to do something heinous, when suddenly I somehow became aware of the situation and of my freedom and flatly refused to do what was required of me. I turned to my tempter in triumph and said, "See? I'm superhuman!" This brought the sarcastic reply, "Well, you're cute, but superhuman? I'm afraid you'll have to prove it." At that point, I awoke, so I suppose I'll never know what further tests of will had been planned for the night.

@WmJas - Perhaps becoming aware of the situation was an early part of waking-up, and the awake restoration of morality?

It's interesting, because as a child I was afflicted with terrible nightmares, to the point that waking up vomiting was something of a commonplace occurrence in those years.

The form of these nightmares varied somewhat, but the moral content is easily describable. I was, in these dreams, responsible for some monstrous or enormous thing, and by inadvertence or inattention it broke loose, wreaking terrible havoc and destroying all in it's path. In one case it was a load of iron chains in the hold of a ship at sea, which got out of storage and began maiming and killing crowds of passengers below deck (this particular dream was associated with a story I read). In another it might be bears or other fell beasts, on more than one occasion I've dreamed of crashing planets or stars into each other, or of a near miss flinging the Earth into the darkness of intergalactic space.

To say that I felt terror is inadequate and misleading...these dreams didn't make me feel that I was personally in danger. They made me feel intense guilt.

The interesting thing is that I still have such dreams, but I feel no discomfort or dislike of them at all. I generally still make an effort (in my dream, that is) to avert the effects, but it doesn't bother me that I fail and massive destruction on incomprehensible scales then results. I rather enjoy them as an attendant of restful sleep. Sometimes the results are too ludicrous to do other than smile, after all.

That's not to say that if I had a button that would destroy the world I'd slap it till my fingers were busted, but certainly if I had such a button and happened to sit on it accidentally, I would probably shrug and chalk it up to bad luck (for the world, not for me).