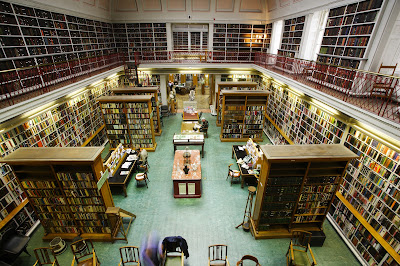 ...Was, for me, a single small room in the village, with stacks only around three walls, and not full height or complete at the back - yet it seemed full of discoveries once I had 'graduated' to the adult sections (aged 14). Furthermore, merely for the trouble of filling-in a card, I could order... anything! from inter-library loans.

The next step-up was the Bristol City Library, which was essentially endless - the problem being to decide which of the inexhaustible riches, I should borrow on this particular day... The only problem being a two hour round trip to get there and back.

(It was only seven miles away, but the buses were very infrequent, unpredictable, and slow...)

Probably no other library since has been qualitatively a step-up for me; all university libraries being experienced as variations on the Bristol library... but they have often been superior as places to read, study, and have a coffee.

I have a similar love for second-hand bookshops (not so much for new bookshops) - but good libraries have the great advantage of a higher number of worthwhile books, and a higher ratio of worthwhile to worthless ones.

Of course beautiful libraries have an extra dimension - although the beauty of a library is a different thing from architectural beauty - it is more a matter of niches, than of overall effect.

My current favourite is the Literary and Philosophical library in Newcastle (above) - which is a pleasing early 19th century building, and well provided with various niches. A good place for treading-water among the stacks, and fishing for (or being hooked-by) who knows what...* 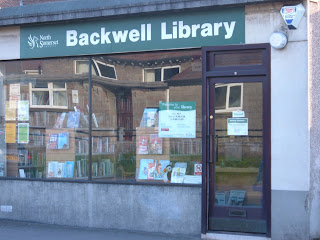 Where it all began... Thanks to the legendary 'Mrs Everson', Librarian

*Does anybody - without Googling - recognise this garbled reference to a favourite story?

One of the most memorable and formative experiences of my life was working in the Hoover Institution Library at Stanford University. As a closed-stacks library, my job as a page was retrieving patron requests and reshelving books and other materials. I learned more from browsing the shelves and reading while sitting on the steps of the Hoover Tower stairwell than in all of my undergraduate courses combined. One of the downsides of e-books is losing the opportunity for discovering what books are shelved alongside the one you came for.

Yes - physical browsing is irreplaceable - for that reason I am never 'fond' of copyright libraries, where all books are ordered (I only know one well - that in Edinburgh).

My best guess at the reference is _The Wind in the Willows_...?

Successful fishing doesn't usually involve treading water. But at the beginning of the Voyage of the Dawn Treader, Lucy and Edmund and Eustace must tread water long enough for King Caspian's crew to fish them out of the sea.