Direct Christianity made possible by Christ's presence 'in the etheric'? 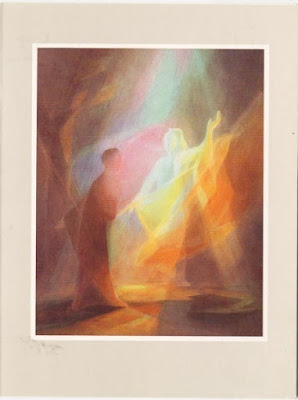 One way of thinking about Direct Christianity is that - in this modern era, and due to the limited scope and corruptions of the Christian Churches - we may experience Jesus directly, that is without the traditional sources of revelation such as church, scripture and practice.

I explored this possibility in a post last summer (before I had developed the idea of Direct Christianity) on Albion Awakening, which I excerpt and edit below:

Rudolf Steiner realised that it was God's hope, and the time was ripe, for modern Western Man to move to a new kind of intuitive spirituality of thinking. It was therefore Man's destiny to move forward from the dominant materialism, and spiritual blindness, of the modern era; and if this happened then there would be new and expanded possibilities of direct, intuitive knowing.

One vital and crucial aspect of this was that If Man developed this new spirituality, Then he would come to experience Christ as a living and active personal presence in the world - not by seeing, hearing or touching Christ in his body (this would have to be an imagined Christ, an hallucinated Christ); but instead by a direct, intuitive knowing of Christ in thinking.

What this means, in practice, is that for modern Man it is more important to become spiritual than to become 'a Christian' because to become a non-spiritual Christian is not enough; while to become truly spiritual will also, inevitably, sooner-or-later, lead to becoming a Christian by direct personal experience.

Could it really be that - here and now, in this modern world - well-motivated sincere spirituality of the true self will lead to true Christianity for any serious, seeking individual, without any other input being necessary?

This sounds outrageous at first; but it is clear that merely 'being a Christian' in the usual sense is not enough now (if it ever was).

Modern Christians are often terribly lacking in discernment, and wide-open to demonic deceptions, corruptions and inversions.

The traditions of the churches are wrecked, Biblical interpretation deeply distorted, philosophy riddled with false assumptions; the general culture is one of lies, ugliness and sin-enforced as virtue; many or most church leaders, priests and pastors are primarily secular Left materialists working strategically to harness Christianity to politics; Good to evil...

There are so few safe and reliable sources of Christianity that it seems we must have direct knowledge of the truth - or else what we learn may be worse than nothing.

Specifically: we need direct and personal knowledge of Christ, or we are lost.

Because we need direct knowledge of spiritual truths, that is now made available to us; and the method by which this is possible should therefore be our first priority.

I would caution that there are evil spirits as well as good, merely being attuned to spiritual energies is not sufficient, one must be attuned to the right spirits.

As the horrors of the anti-Christian forces in the world become more exposed, it is ever clearer that much of their evil is motivated by hatred and contempt for the physical body, preferring the company and teaching of spiritual entities.

But not the right spirits.

What Christiany gives you (in theory) that plain spirituality does not is accountability. You are accountable to God for your time on this earth. Plain spirituality not grounded in Christiany places the person himself at the center and makes them accountable to no one but themselves. I say "in theory" because modern Christianity has often turned God into our adoring best friend who looks at us with simpering love, almost like God is saying: "anything you do is ok by Me because I love you and I forgive you, but more importantly you must forgive yourself."