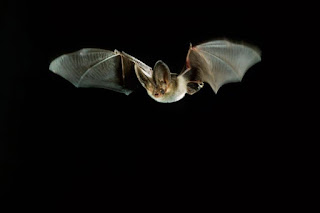 In my recent description of the Urban Wildlife I have experienced; I forgot to mention one of my absolute favourites - which are the bats - presumably of the pipistrelle species.

Bats aren't easy to observe - and it was many years before I did observe them. This is because they are out hunting only at dusk or dawn, certain times of year - a time when visibility is intrinsically difficult, such that they can be seen only when silhouetted against the semi-dark sky.

Since I cannot hear their high frequency calls at my age; they are identified by their flight - which is indeed very different from the flight of a bird. The bats zig-zag along, chasing flying insects, in a way that is both clumsier and more agile than the flight of a small bird.

My closest encounter with a bat happened when I was a teen visiting a friend who lived in a cottage in the grounds of an mansion - surrounded by ancient outbuildings. We came across a cat carrying something in its mouth - which turned out to be a young bat. We made the cat drop it, and the bat seemed unharmed.

After a brief attempt to feed it milk from a drinking straw - when I realised how flexible and soft was the leather of its wings; we took the bat up into the attic of an old barn, where the adults were nesting, and released it a few yards from the adults - I can still remember the comic way it walked towards the other bats, sometimes crawling, sometimes with its wings extended... 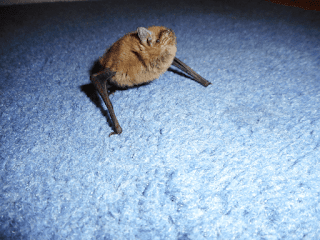 I see bats flying around my neighborhood virtually every night. I once opened my front door and found a bat just sitting there on my front step, its wings folded up. Having ascertained that it was alive, I took it into the house and gave it some milk (which it drank) and a mealworm (which it had no interest in). I had assumed from its strange behavior that it was injured or sick, but then it suddenly took off and started flying around the house. We finally managed to corral it out the door, and it flew away.

In the people's democracy of the UK (Britons never shall be slaves, etc.) if you so much as *touch* a bat you are liable to twenty years in jail plus a million pounds fine (or something... I forget the exact details of the draconian threats that I read on an 'official' leaflet at a wildlife centre).

British bats belong to The Authorities now: because they are the only ones who Care.

We were in Cheddar Gorge last week. One of the "cave men" (attendants) as my son called them explained how the bats fly out of the public entrance every night and come back an hour or so later.We nearly stayed to witness it but the Tor was calling us for the sunset.
Later we saw bats while roaming the Cathedral grounds in Wells.A good day well spent and ending with Evensong in probably the finest Christian building in England. Thanks for inspiration Bruce!

Fortunately, Taiwan is still pretty free in that respect. Animals (mostly birds) in need of help frequently turn up at my home, which has from time to time served as a halfway house for a pigeon, a nightjar, a night heron, a swallow, a mynah, the abovementioned bat, a couple of dogs, and a pretty steady succession of cats.

@Wm - I have a kind of magical fascination about nightjars - which I don't think I have ever seen or heard (not so as I identified them, anyway) - so I envy you that one especially.

But not the stray dogs...

It's a really bizarre-looking bird, like a big bullfrog with feathers. It showed up at our nextdoor neighbor's house, and she immediately called me, saying (in Chinese) "There's some sort of a -- thing here for you! I'm not sure if it's a bird or a rabbit or what, but I think it got the wrong house!" All of our neighbors take it for granted that of course ours is the house animals are supposed to randomly show up at. (That Carpenters song that starts "Why do birds suddenly appear every time you are near?" was apparently written for me.)

The nightjar wasn't in the mood for flying during daylight, so we kept it in an old birdcage (one we had bought for a mynah fledgling we had rescued when it fell from its nest inside the hollow aluminum tube that supported a traffic light, considered prime real estate by Taiwanese mynahs) until nightfall, tried unsuccessfully to feed it some mealworms (the only insectivore fare readily available at my house), and then released it outside town. Once it was dark, the nightjar seemed to be itself again, and it flew away.

Have you read "The Bat Poet" by Randall Jarrell? If you haven't, I think you should pick it up; it will feed right into your tender feelings towards bats. I pull it out and read it to my 2 oldest (4 and 7) kids every now and then and they both quite like it....well at least they don't say that they dis-like it, so I take that as a win.

It's a story of a small brown bat who decides to stay sleeping under a porch even though the rest of his family moves into the barn at the end of the summer. Being alone and exposed makes it hard for him to sleep through the day so he begins to observe the waking world. He gets enamored by the poetry sung by a local mockingbird and decides to write his own. I wont say too much more, but I find the first encounter between the bat and mockingbird to be simultaneously funny and relevant to the broader themes of your blog.

Seriously, there's a similar law in the United States. I found it summarized on worldofhummingbirds.com as I researched info on the kind that nest in my yard.

"If someone is caught violating this law, the hummingbird will be taken away immediately and there is a fine of anywhere between $15,000 (fifteen thousand) and $200,000 (two hundred thousand) US dollars."

I'm going to hope that the woman who wrote a piece for a printed neighborhood magazine (those still exist!) on baby hummers, and whom to call to rescue abandoned ones, has one of the aforementioned permits.

Would British authorities allow the placement of a bat house on your property?
https://batmanagement.com/blogs/bat-roosts/why-do-some-bat-houses-fail

@ap - I don't know, but I expect so - Most things are forbidden, and everything not forbidden is compulsory.