If World War II had been based-on The Lord of the Rings... 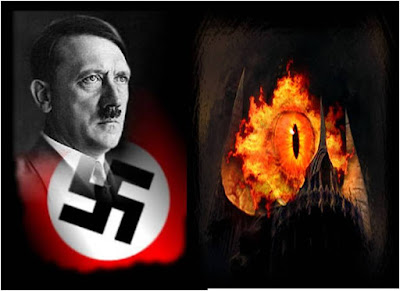 A first version of the following post appeared on my Notion Club Papers blog a couple of years ago, and proved popular among some people - including Fantasy author L Jagi Lamplighter. So I though I'd re-run it on this blog, lightly edited...

In his Foreword to the 1966 Second Edition of The Lord of the Rings, Tolkien was at pains to emphasise that the book was Not an allegory: in particular it was not an allegory of the 1939-45 World War:

The real war does not resemble the legendary war in its process or its conclusion. If it had inspired or directed the development of the legend, then certainly the Ring would have been seized and used against Sauron; he would not have been annihilated but enslaved, and Barad-dûr would not have been destroyed but occupied. Saruman, failing to get possession of the Ring, would in the confusion and treacheries of the time have found in Mordor the missing links in his own researches into Ring-lore, and before long he would have made a Great Ring of his own with which to challenge the self-styled Ruler of Middle-earth. In that conflict both sides would have held hobbits in hatred and contempt: they would not long have survived even as slaves.

We could, inverting Tolkien's point, play with the idea of what would have happened in WW II if it had followed the lines of LotR...

The One Ring = The Atom Bomb

The Free Peoples = USA and UK

The plot would focus on the destruction of the Atom Bomb (and implicitly all knowledge required to make it) by a small team of English patriots led by George Orwell, who infiltrate Germany and destroy the evil research establishment which is making the A-bomb.

The team are 'helped' by a slimy little creature called Mussolini, who gets them into the lab but intends to seize the death weapon for himself.

The climactic end would be the death of Mussolini; killed when the ready-for-use bomb prototype explodes in his face as he tries to steal it. A chain reaction speads through Nazi HQ and Hitler and his Nazi-Nazguls are caught in the conflagration, ending the National Socialist regime.

Orwell and his 'batman' servant Monty are airlifted from the blazing ruins at the last moment.

Europe comes under the rule of the restored King Albrecht - the exiled Duke of Bavaria, and heir to the United States monarchy. He had been given the throne by popular acclaim during the course of the war, and is now ruling from his palace in Richmond, Virginia.


En route there would be the destruction of the Soviet Union, the restoration of the Tsar, and the exile of Stalin.


After Moscow is obliterated by enraged Finns wearing Mech suits; Stalin makes his way to England, where he is welcomed by the quisling Communist Prime Minister, Konni Zilliacus. Stalin swiftly invites foreign mercenaries, takes over in a secret coup, enslaves the native English and manages to pollute or destroy much of the countryside before Orwell and his English patriots return and raise a successful counter-revolution.

After the scouring of England, the defeated Stalin is stabbed by his creepy deputy Lavrentiy Beria - who is immediately executed by a mob of pitchfork-wielding rustics (despite Orwell's protests...).


England repudiates industrialisation, is demilitarised, sealed against immigration, and made into a clan-based dominion ruled by benign hereditary aristocrats - under the personal protection of King Albrecht.


Orwell, traumatised and made consumptive by his wartime experiences, sails West toward the sunset in a small boat and eventually arrives in... Ireland; where he ends his days peacefully as a subsistence crofter...


(No wonder Tolkien cordially disliked allegory, 'in all its manifestations'...)

Bunyan excepted, I too despise allegory and you have succeeded well is demonstrated the clumsy literal mindedness that normally plagues allegory. With one exception. Mussolini as Gollum rises to the level of wicked wit. Well, done!

@Igude - In general I agree - and find allegory tedious.

Yet, significantly, Tolkien did write allegories himself - notably Leaf By Niggle, which only really makes sense if understood as Niggle = Tolkien, the journey as death, the workhouse as purgatory, the Voices as God the Father and Jesus Christ, and Niggle's Parish as a part of Heaven.

Smith of Wootton Major has significant allegorical elements - with village hall as the church, the cook as priest, and cooking as religion; amongst others.

And Tolkien's famous statement about Beowulf being like a man who built a tower is also a mini-allegory.

But all these are brief. I think Tolkien's anti-allegory animus probably applied to long works of sustained and complex allegory, especially High Fantasy - such as Piers Plowman or Spenser's Faerie Queen; where allegory, or irony, or breaking the fourth-wall in any way - any 'external' reference - tends to sabotage the subcreative 'world building', which is what we most value in such works.