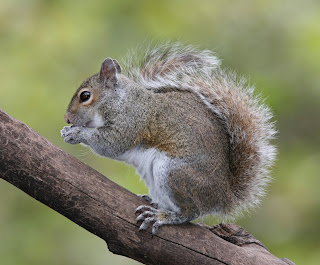 Although I live only just over a mile from the city centre, this is something of a 'leafy suburb' and I have a decent garden. Consequently, there is a fair bit of wildlife to be enjoyed - currently a pair of rival grey squirrels are providing much entertainment, and we have begun feeding them.

Another pair - also presumably rivals - are the nightingales whose unsurpassed singing (equally as-good-as but different-from the many virtuoso blackbirds) is easiest to hear after dusk and before dawn - each nightingle showing his ability, then listening to the other, in cycles lasting several seconds.

Woodpeckers (Great Spotted) are another species that exchange messages - in their case drumming as loudly and long as can be managed, until the opposition gives-up from feebleness.

There are flocks of jackdaws who come to feed - these being seldom seen until the past decade. Magpies have always been common and dominant; wood pigeons are beautiful, abundant, loud, and make an appalling mess on the grass and everywhere else.

Among mammals there are foxes - emitting a wide repertoire of blood curdling sounds, and (unless the holes are blocked) digging holes in the lawn and bringing their cubs to play.

One thing I haven't seen for a long time is a hedgehog. There used to be plenty, but as the above species have waxed, the hedgehogs have apparently waned - which I regret.

There are mice and frogs in the longer grass around the edges - although seldom encountered.

Once, a single snipe/ woodcock came and fed on the lawn when it was covered in snow - leaving hundreds of circular holes where its beak had been probing... 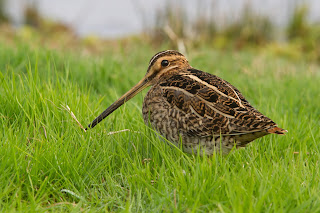 There are also large amphibious rats in the vicinity - although I'm pleased to say I've not yet seen one in the garden...

@William - I daresay others don't look for or notice these things - but there is a wooded valley or 'dene' (mostly steep sided, unstable, unsuitable for building) nearly two miles long at the bottom of our road, with a ramshackle medieval lane coming up to the end of our garden (making a 'corridor') - which probably explains the relative richness of animals and plants.

For my part, my family and I live in a large city of around 2 million inhabitants; we currently reside on a high floor in a nondescript residential block, amidst a forest of other near-identical dreary modern dormitories. The main saving grace is that our windows overlook a fairly large city park, a small part of which is set aside as a nature reserve. There are some sizable green areas in between the built-up areas here, and urban wildlife is fairly resilient, especially in the outer suburbs and close to the numerous parks and mini-nature reserves that are dotted around.

No squirrels, but we do get little grey monkeys, which are actually rather similar in both size and habits. There's a troupe in the nearby park, though they are rather shy there due to people harassing them, so we more often hear their earsplittingly shrill calls through the vegetation than we see them. In quieter areas, they are less afraid of humans, and many will actually take food from your hand, if you have patience and are that way inclined.

Other common species, many of which we can see and hear daily even from our eyrie up here, or when we go into the streets outside, include: green parakeets; various small songbirds such as finches; the odd hummingbird; swallows; and raptor-type birds including several species of owl, the occasional kestrel, scavenging carcarás, and the very numerous black vultures (which I strongly suspect of scavenging and eating city trash, as there are so few large animal carcasses for them to feed from). A small lake in the park contains several species of local wild duck, some very aggressive geese, and numerous freshwater turtles. A pair of toucans once tried to nest within sight of our windows, till an over-enthusiastic park functionary cut their nesting tree down. We see an occasional flock of large wild parrots flying around outside, though this is quite rare as they are not really city birds and are more often seen around the outer suburbs.

Speaking of which, we are expecting to move soon to a house with a fairly large garden (currently under construction) at the very fringes of the city, on the very last suburban street before the surrounding wilderness begins. The shift is often quite abrupt down here, especially in regions such as this one, where the lands have not been settled long.

There in addition to the animals mentioned we should reuglarly see, at minimum: ovenbirds, kiskadees, squirrel cuckoos, diurnal owls (a pair of which currently think they are going to live on the construction site), and various lizards, including large green ones of up to around half a metre long. We should also get regular visits from large parrots (especially if we plant some fruit trees to attract them). A small herd of local capybaras likes to graze next to the main road, on the short drive from our new home to the in-laws' place, so I suppose we will be seeing them regularly too. I have no idea what will show up if I go walking in the nearby scrub, but I presume it must be fairly well-populated with various creatures, some as yet unknown to me.

Your blog's regular readership may not be as numerous as you would like; but perhaps it makes up for this in worldwide reach!

@Hrothgar - Thanks for that! You remind me of another favourite denizen of my garden - perhaps The favourite: a tawny owl, which sits in the lime tree sometimes, emitting the ter-wit calls, identifying her as a female (loud enough to awaken me from sleep, and which always make my hair stand on end) and peering around - before gliding away on silent wings.

You're welcome - I just hope the comparison works out in my favour! Now I find myself wondering whether I come across as a fly-by-night sort of commenter, or whether this impression has more to do with positive owlish associations!