Was Spengler (broadly) correct? The limitations of biological models of cultural development 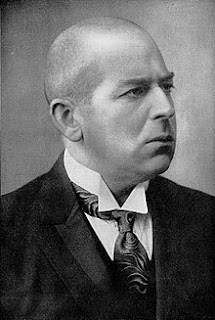 Spengler responding to an improper suggestion...

I was certainly stimulated by Oswald Spengler's 'Decline of the West (1918) when I read it; and found the book to be rich in insights. It is indeed seminal.

But I would have to say that I regard is as essentially wrong.

The wrongness is of two types: the use of biological growth and development as the primary metaphor for cultural change; and the model of civilisational change being cyclical.

The biological metaphor is essentially wrong because it leaves-out the religious element - which I regard as primary among cultural drivers (nothing is more powerful for human cultures than religion, nothing more lethal than the lack of religion).

Once religion has been omitted, then biology - in the form, mainly, of sex and sexuality - does indeed become primary; but only in the context of a terminally doomed situation.

The cyclical model is essentially wrong because human history is primarily linear - and in its most vital aspects never repeats. So the most vital thing to consider is the linearity; and it is only against this unidirectional-unfolding that small cycles may be observed.

Christianity recognises this directionality and purposiveness to human history - and all Christians really ought to have this as a built-in metaphysical assumption - Time is linear, sequential, and without exact repetition.

(However, many Christians have-been and are confused by their metaphysical assumptions that God is outside Time as well as Space. But at any rate, the sequential linearity of Time certainly applies to mortal life on earth - bounded at each end by the first and last Men; by creation and the end of things.)

In sum - Spengler is certainly worth reading; and some of his successors and emulators likewise; so long as it is borne in mind that they are all, basically, wrong!

Biological development is also essentially linear and one can say that it never repeats in the most essential elements.

I suppose it depends on what you think is really important.

The Christian view is that the individual's personal relationship to God is essential, the society is temporary and its development ultimately meaningless.

Aren't the cyclical and linear elements of history simply two component parts which are vital for human life? In the same way that male and female, and other dualistic pairs are vital. Without the cyclical component there would be no repetition and therefore tradition. And without the linear there would be no newness and therefore no creation. A purely cyclical world would be one with no things repeating cycles of no events. Whereas a purely linear world would would one in which a single being engaged in constant creation with no memory of where he'd just come from or what he had just done.