Perhaps the greatest piece of music of all? Chaconne from Bach's second Partita for solo violin.


This is the version I own - part of a boxed LP set of all six solo violin sonatas and partitas by JS Bach played by Sigiswald Kuijken, that I bought in 1984-5. 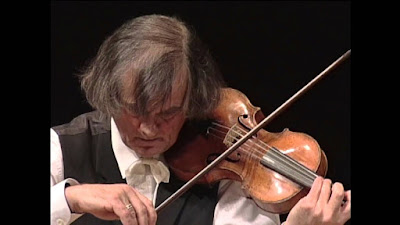 I should say upfront that this perfomance, which I regard as truly great in its intensity and musicality; is not the most tonally beautiful you can find; because Kuijken uses a restored ancient instrument, held without use of the chin, with an 18th century bow - and deploying the kind of techniques for playing that Bach will have known and himself deployed.

Therefore the sound produced is more rasping and less rich than we are used to since the technical innovations of the 19th century. You will either adjust to this, or not.

But the sheer concentration and insight into the music is incredible. The piece is - as you can see from the score - extremely difficult to play at all; but of course the point is to play it such that the greatness of the music itself comes-through (not as a virtuoso exercise). This perfomance merits total concentration on the part of the listener - and the reward is that it is so moving as almost to be unbearable in its unearthly strivings at the limit of what is expressible by Man.

Also it just gets better and better; up to the very last, single, note.

Note: I have previously posted two transcriptions of this piece: one for saxophone quartet and the other (first rate quality - Bach-Busoni, played by Ogdon) for piano.

This is my favourite version too although it is the first one I heard which always has an influence.

@William - Ha! But it wasn't the first I heard - I heard all six played live in the University concert hall over three lunchtimes when I was a medical student, played by Barry Wilde - then leader of the Northern Sinfonia. It was excellent, and got me used to the idea of concentrating on a solo violin, which isn't easy to appreciate.

What an intense experience that turned out to be! Thank you for bringing it to my attention.

Thank you. Synchronicity at its most powerful.