Albion Awakening - The Book of The Blog!

What you have been waiting for! - The Book of the Blog - Albion Awakening, by John Fitzgerald and William Wildblood - with an introduction by me: 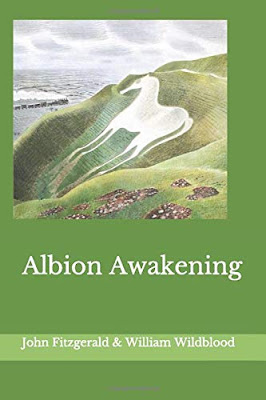 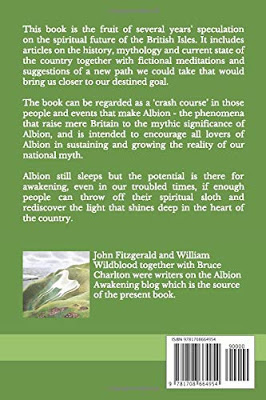 Albion Awakening was a blog which was shared between the triumvirate of myself, William Wildblood and John Fitzgerald. The theme is contained in the title: the blog was dedicated to the hope that ‘Albion’ - the legendary, mystical soul of ‘Britain’, would awaken and take-up her true spiritual destiny.

The blog was launched summer 2016, in the aftermath of the referendum vote in favour of Brexit; which we understood to represent a spiritual rejection by The People of Albion of the plan to subsume Albion in a European, bureaucratic super-state. Beyond that, we all agreed that leaving the European Union was - at best - only a first step; and that for any good to come from it the next step would need to be spiritual, not political. The blog continued for more than two and a half years, until it reached a natural close in spring of 2019.

The three of us brought different qualities to the blog. We are all Christian, all - indeed - inclined to a Romantic Christianity that sees a large and vital role for imagination, creativity and direct personal experience. We all, too, regard the Oxford Inklings group as spiritual mentors: in particular JRR Tolkien, CS Lewis, Charles Williams and Owen Barfield.

Beyond that - like the Inklings - we each have a somewhat different Christian emphasis. I was a lifelong atheist who converted in late middle age, and became an essentially unaffiliated Christian. My spiritual practice is rooted in a pluralist and evolutionary metaphysics deriving from sources such as Mormon theology, and the spiritual philosopher William Arkle.

William came from a Church of England background, and became a lifelong spiritual seeker - focused on Christianity; but at times including experience of Eastern, specifically Hindu, practices. He has a long experience of meditation and a vital period during young adulthood when he participated in direct contact with spiritual Masters.

John comes from a Roman Catholic, ultimately Irish, background - and sees his Christian life as rooted in the tradition, legend and myth of the British Isles. He is a story-teller as well as an historian; and sees a vital role for the imaginative arts in awakening Albion.

My contribution, as the blog administrator, was mostly to write a large quantity of mostly topical and off-the-cuff posts. I used the blog as something rather like a notebook, and produced something like a stream of consciousness of ideas relating to the main theme. Consequently, my posts were of essentially ephemeral interest, and we decided not to include them here.

William’s and John’s blog posts took more of a set-piece form; they contributed many rounded and polished mini-essays - also, in John’s case, short imaginative fictions - on many topics relating to the Awakening theme. This volume is an edited selection of such pieces from Albion Awakening. Their value is of two main kinds: knowledge and inspiration.

In one sense, this book could be regarded as a ‘crash course’ in those people and events that make Albion - the phenomena that raise mere Britain to the mythic significance of Albion. In a second sense; this volume is a collection of potentially inspirational fragments of the Albion myth - which, we hope, will encourage (that is, give courage to) all lovers of Albion in sustaining and growing the reality of our national myth - from and within each of our-selves.

As arranged in this volume William and John’s essays constitute a mosaic or collage of colourful reflections and suggestions on the subject of the spiritual nature of Albion: what we have-been, are, could be… and what we should be.

Don't beat about the bush, BC. When's Arthur coming back?

@d - At the last minute, when we have proved we can't do without him. He wants us to do it for ourselves. This was why he had Bran's head removed from Tower Hill, the one that had been magically protecting Britain from France (and, presumably, the EU). Arthur felt it was making us soft. Presumably he will want us to fight our own fight - until all is Nearly lost, anyway.

dearieme, when we merit it!