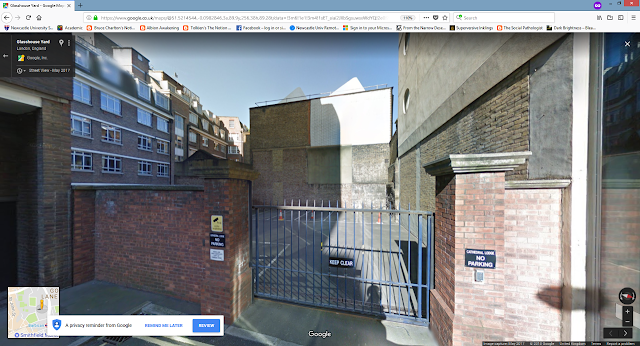 WmJas Tychonievich put up a picture of one of his cats atop a high cabinet - an impossible ascent.

I did that too. See the wall on the left? I climbed over it (alone) one evening, wearing a big overcoat - I was escaping from a... situation in a rough pub in the East End of London - and found myself at the end of an alley.

I was not being pursued or anything, but this wall was separating me from my accomodation in the hall of residence for St Bartholomew's ('Barts') Medical School. It was a long way around to the main entrance. I was late. Nobody was around...

I went back the next day, and there is no way I could have climbed that wall - what is it, 8 or 10 feet high with a little parapet?

I know it is not a superhuman feat, I could presumably jump and catch the top... But I'm no athlete, I was heavily garbed, and I had been compelled to accept an excessive number and volume of beers from people who made it clear that refusal would be regarded as an insult. So I was in No Condition to climb that wall at all, certainly not safely.

But somehow I found myself on the other side and OK.

No theories - except that I saw the wall, thought - yeah, I can get over that; and I did.

An admirable accomplishment. After too much beer, I usually just walked right into walls and fell down.