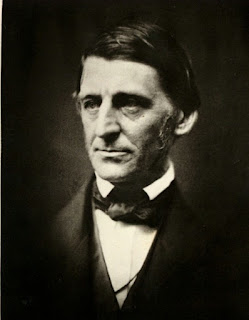 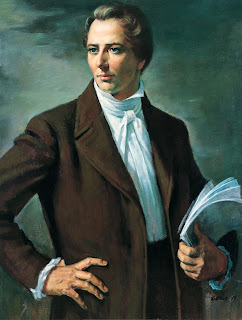 Separated at birth? Perhaps not; but a certain nasal similarity evident...

It is an interesting fact that author Ralph Waldo Emerson and the Mormon prophet Joseph Smith were almost exactly the same age, and lived in the same region of Greater New England. Despite this, in most senses the two men were about as different as could be, and inhabited extremely different worlds.

Emerson was upper class, highly educated and widely read, literate and an extraordinarily powerful preacher/ lecturer; while JS was none of these.

RWE's world was intensely cultivated and inhabited by famous intellectuals and artists; JS's world was raw, violent, in near turmoil - I was particularly struck by the continual, daily - almost hourly - possibility and actuality of unrestrained 'vigilante' mob violence.

For instance, shortly after he founded the Mormon Church, JS was severely beaten, tarred and feathered by a mob; and his castration was planned, he was stripped and tied to a board but at the last moment the doctor brought along for the purpose could not bring himself to do it. Emerson only encountered any such things in the pre-Civil War heights of anti-abolitionism.

Even in economic terms there was a stark contrast - Emerson's world was one of considerable security (by world historical standards) and for his early decades there was near zero poverty in Concord (Emerson was astonished by the poverty and depravity he saw in the much richer and more powerful cities of England); while Smith was himself poor, often hungry and lacking basic necessities; surrounded by poverty - families were continually uprooting and seeking subsistence, 'borrowing, begging etc.

So much for the differences. Yet the similarities in terms of magnitude of international spiritual/ religious influence are striking. One was that both Emerson and Smith had more-famous disciples: Henry David Thoreau and Brigham Young - who both provided a form of influence that was clearer and simpler, and therefore more easily transmitted than the master's original doctrines.

Emerson came from a Ministerial Calvinist (Puritan) background which moves through Unitarianism into Deist transcendentalism, and then a non-supernaturalist spiritualism focused on subjective sensations.

Thus Emerson, and his 'disciple' Thoreau, are spiritual and indeed lineal fathers of that vast modern phenomenon of Liberal New Age spirituality which dominate modern 'religious' seeking and expression

Emerson's spiritual influence was extremely large in scale, but diffuse in effect and tailing-off into mere entertainment and distraction.

Joseph Smith has been hardly less successful in terms of influence, leaving the only Western form of Christianity that has retained its devoutness, grown rapidly in size by winning converts and above replacement fertility, and has thriven among the educated and successful.

However the nature of influence was very different in each instance.

Smith's influence was numerically much less than Emerson's; but was spiritually much more concentrated and powerful - objectively transforming the lives of his followers.

The US has been, since the early 1800s, the creative centre for new movements in Western religion - and Emerson and Joseph Smith were perhaps the most important of enduring influences. The very difference between their legacies is remarkable: Emerson having been assimilated into the mainstream mass media expressions of 'mind, body and spirit', self-help and esteem boosting; while JS's remains focused, hard-edged, tough and private.

So, what would each think of the other, and who would me most pleased with how things had turned-out?

I think Joseph Smith would have been broadly satisfied with his legacy church, at least until recently when family size has dwindled towards replacement levels and conversions among Westerners have plateaued. But Emerson would have been utterly appalled at how transcendentalism had turned-out.

Transcendentalism turned-out exactly the way that Emerson's most vehement critics at Harvard and among the Calvinists and stricter Unitarians said that it would turn-out - except even worse: a chaos of irrationalist emotional subjectivity which justifies anything, or nothing.

Emerson's legacy includes not just the shallow, selfish and self-indulgent spiritual seekers of today, but Nietzsche and his various spawn.

I suspect that if Emerson could have foreseen how things would have turned-out; he would have recognized and repented his error, and returned to some orthodox form of Christianity (perhaps Roman Catholicism).

Or else, maybe RWE would have become a Romantic Christian. This was a brief phase he passed  through in early life, but maybe he would have stayed to work-on Christianity with the same genius that he applied to leaving Christianity. And maybe too, if Joseph Smith had not been prematurely killed, he might strengthened the radically different theology and the Romantic personal-experiential or 'mystical' aspects of his church.

Anyway; whatever is needful that Emerson and Smith did not do, we each may do for our-selves - if we give the matter our best attention.

It occurs to me that you could also do a "separated at birth?" picture comparison for Young and Thoreau.

Wm - I don't see it - although contemporaries said that Thoreau looked somewhat like Emerson (a brother perhaps). Thoreau straikes me as small and slight - wiry; whereas Brigham seems solid, square, ruggedly powerful - and these traits are reflected in the face.

Yes, that's true. It was the hairstyle and the neckbeard that made me think of them as similar.

"I suspect that if Emerson could have foreseen how things would have turned-out; he would have recognized and repented his error...", reminds me of something Emerson wrote about Luther(in his lecture Natural Religion)- "Luther would have cut his hand off sooner than write theses against the Pope, if he suspected that he was bringing on with all his might the pale negations of Boston Unitarianism."