An image of impending dehumanization - from Amo Boden 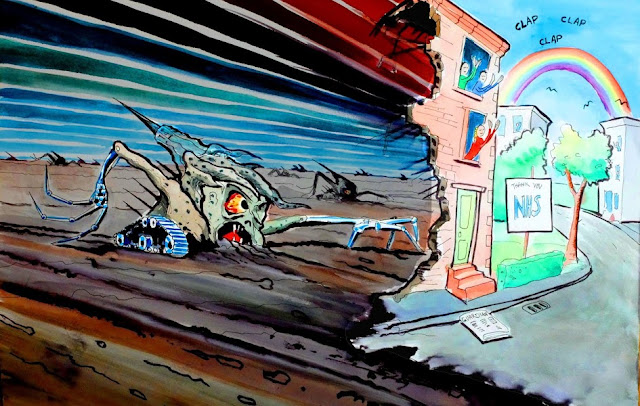 The above literal nightmare image of contemporary British life comes from Amo Boden; whose (Owen Barfield/ Rudolf Steiner influenced) 'Brief Outlines' blog and video channel are always worth a visit.

The above image apparently came to him in the early hours of the morning; and seems to reflect an earlier blog post where he wrote (emphasis added):

Our society views the human being in the image of the machine. Perhaps that is why so many have accepted the lock-down without much fuss. To such a view-point, locking-down the entire world until the virus burns itself out is an obvious solution. In fact, if it saves lives this is the only moral thing to do.

Now a machine can be isolated from other machines and put on stand-by indefinitely, and then re-booted again to operate just as normal, as if nothing had happened. A human being, however, cannot. And we are about to witness the consequences of assuming otherwise.

For the reality is that we are not machines, and to someone who sees that civilisation is fundamentally held together, not by the machinery of bureaucratic rules and armies of police forces, but by real-world relationships between individual people, all supported by a myriad of common customs, traditions and mutual agreements, will see in concepts such as social distancing and the indefinite suspension of the right to assembly something far more sinister than anything a virus could cause.

Thanks for sharing, and thanks for combining the text with the image - you're way ahead of me.

@Amo - The text and image can't exactly be 'combined', but they do illuminate each other!

Looking again at that memorable illustration; it could be Ahrimanic demons eating-away the souls of those who 'don't believe' in them.