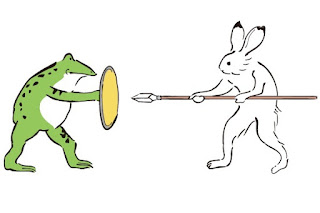 You may recall being about six years old when somebody asked you what happens when an irresistible force meets an immoveable object. It seemed like a deep question; but of course it isn't really deep; just evidence of how people can stun their own thinking by use of abstract infinites.

The paradox is no deeper than being puzzled by any other contradiction such that stating the sky is simultaneously bright red and sea green.

Of course, within the tautological constraints of mathematics abstraction and infinites can be tools - despite that they are un-understandable and do not correspond to real-world-realities. But it is merely yet another abstract infinite-type assumption to suppose that mathematics/ geometry/ number is total reality, or real-reality - as some Platonist-types believe.

(This  -despite the greater respectability of being an ancient error - is no more sensible nor valid than the more common modern assumption that evolution by natural selection is the ultimate reality; which - under the name of complex systems theory - is what I once believed.)

Under the influence of this kind of ancient Greek and Roman philosophy; at some point in its early centuries, Christianity saddled itself with the unscriptural, none-sensical dogma that God is an infinite abstraction - I mean the assertion that (to be "a real Christian"; to join our - true - church...) you must believe in the omni-God or Super God.

How unfortunate that such a bizzare, mind-numbing, Christ-destroying, freedom-obliterating, evil-denying-not-sense became established as definitional in the religion that purports to derive from the life, teaching, death and resurrection of Jesus?

I always learn something from this blog, but I hardly expected to learn Chinese etymology! I use the term 矛盾 all the time but never knew the story behind it.

@Wm It was my son who told me the "contradiction" etymology story, and thereby gave me the idea for this post.

Here's the problem, if God is that beyond which there is none, then we are dealing with an infinity, not only an infinity but THE INFINITY.

Hence, if God is, it is not containable within any frame that a finite being can construct or imagine. If it is, then the less one says about it the better, and if it is not, then saying anything is to say something about nothing.

And that in essence is the paradox of theism.

So what is a theist to do?

As an a-theist, my suggest would be to stop playing word games, and just see where you are lead in your search. If God is, and you are sincere it should jump out at you from every nook and cranny, and if not you'll tire of the dead air at the other end of the line.

What strikes me about a lot of theists is that the outer form of belief is given such importance, and often to the exclusion of direct apprehension via ecstatic states. To use an analogy that some schools of Sufism use, it is as a groom who is fixated on one of the veils as oppose to being compelled to remove every veil to reach his Beloved. (Veils are meant to be parted and thrown aside, not idolized. The problem is, many prefer the veils to that which may lie behind them.

@NF - You've been commenting here for many years - surely you know that I do not accept your definition of an infinite God? I gave my definition in many posts: God is the creator. Infinites don't come into it.