Back to the Notion Club Papers; connections with the current spiritual war 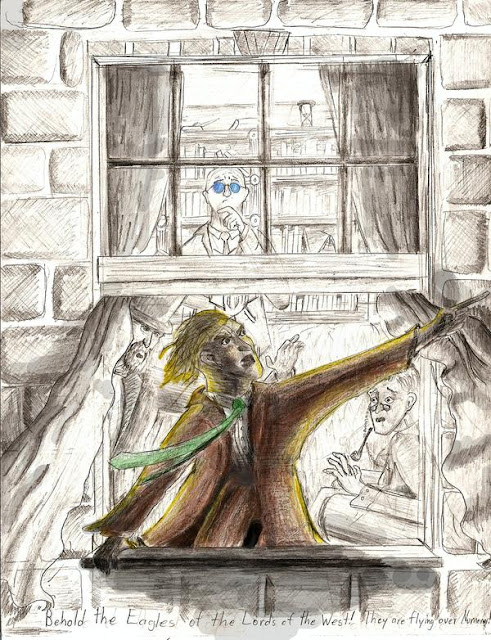 I am currently on an all-round diet of Tolkien - Reading The Notion Club Papers for the nth time (and dipping-into other things); and listening to the audiobook of Christopher Tolkien's thematic edition of the Beren and Luthien texts (2017).

Coming at the Notion Club Papers this time, I am much aware that Tolkien was writing this as a spiritual exploration, he was trying to solve some pressing personal problems by writing them. Instead of working these out in real-life conversations with the Inklings; he chose to do so through the the Notion Club - which were fictional-fantasy Inklings.

And then he would read what he had written to the actual Inklings, presumably to gather reactions; and return to do more Notion Club - all through the first half of 1946 until he again took-up The Lord of the Rings, never to return again to the NCPs.


What Tolkien was concerned by, was something that 'obsessed' him all through his writing life - which was the 'frame' of his fantasy.

The NCPs open with Tolkien's alter ego Ramer (one of his two alter egos in this work - the other being Lowdham) having just read a science fiction story about another planet to the Club; and being criticised for the clumsiness and perfunctory, unconvincing nature of the 'framing device' for travel to and from this planet - apparently in a spaceship of some kind.

Tolkien himself needed a way of relating, of explaining, the link between his stories and the modern world.

After considering various possibilities, the consensus is that some kind of mental travel is the best possibility - either telepathy or in a trance or dream state. A psychic link needs to be established between a human body here-and-now, and other times and places. This was actively being considered by Tolkien as the basis for linking his 'Middle Earth' (Arda) writings with modern Oxford - in which case the NCPs would have been, in effect, the first volume of The Lord of the Rings and/or The Silmarillion.


But in a larger sense, which soon becomes apparent; Tolkien is writing more generally about the relation between his imaginative fantasy and the modern mundane world. The Club's discussions branch off into considering how - as imagination goes back - history turns into myth. And it is clear that the mythic way of thinking is regarded as being of great value. Indeed, the projected NCPs seem to be about re-establishing the link between myth and modern life.

Following the telepathy/ trance/ dream line of thinking; this link is established by members of the Notion Club themselves, as a consequence of their conscious and purposive brooding on this theme. In effect, because they regard it as important and as possible - the Notion Club are able to bridge time and space in their own minds, thereby opening a 'channel' through which myth can re-enter modernity.

This at first happens by the storms that led to the drowning of Numenor, breaking-through to sweep the British Isles from West to East (Ireland bearing the brunt of it, but Oxford also severely affected).


What impresses me with the NCPs this-time-round, is that Tolkien was saying that thinking is real - and that purposive, conscious, sincere thinking has an effect on the world - primarily a spiritual effect, but also a physical effect (albeit something of a minor disaster in terms of wind and floods).

Also, I am appreciating the way that the Notion Club are engaged in a kind of intuitive searching. They don't know exactly what they are looking-for, nor do they know where or how to find-it. So they try this, and that - and follow hunches to see whether they lead to anything.

Ramer and Dolbear being by means of trances and dreams; and in the second part Lowdham and Jeremy extend this to a physical search for... clues and connections; travelling by boat and on foot in Ireland and the West coast of the mainland of Britain.


I am finding all this is encouraging me in my current efforts, as described recently. Because The Notion Club Papers is - in one sense - 'about' the need to combat the deathly, dead-ly materialism and reductionism of modern society; to combat it consciously and purposively (and effectively) by our minds, our imaginations.

I wonder how the experiences in NCP compare and contrast with those: of the Men and Finrod encountering each other, when the Men have visionary experiences of/through his singing without knowing the language; of the interactions of Ulmo, Tuor, and others in the fragmentary last version, 'Of Tuor and his Coming to Gondolin'; of those of Tal-Elmar with the Númenóreans and his dream-acquisition of Elven language; and of the experience of Elven magic in 'On Fairy-stories'.

And how does or does not the experience of texts in manuscripts in NCP relate to Tolkien's ostensible sources for his ostensible translations?